The Export-Import Bank Expires Tomorrow. Here’s What You Need to Know. 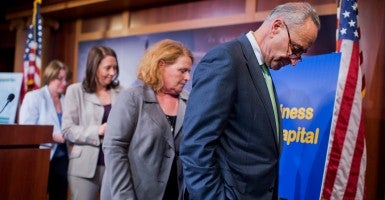 The Export-Import Bank’s charter expires tomorrow, and members of Congress—who are home for a week-long recess—have run out of time to reauthorize the bank.

Now, for the first time in the agency’s 81-year history, Ex-Im will likely close its doors, at least for a little while.

“This is a small step toward renewing a competitive free-market economy and arresting the rise of the progressive welfare state and the cronyism attached to it,” House Financial Services Chairman Jeb Hensarling said in a statement. “Ex-Im is not only corporate welfare, it is corporate welfare for foreign companies and countries.”

Though the bank’s charter will expire tomorrow, Ex-Im officials will still report to work, as financing awarded before June 30 continues through the life of the loans, loan guarantees and insurance policies.

Ex-Im, however, will no longer be able to extend new financing to foreign countries and companies.

“Six months ago, no one in this town would have thought the Export-Import Bank would actually expire. But by raising the issues at the bank and showing how it’s the ‘bridge to nowhere’ of corporate welfare, we are now on the brink of ending the bank’s charter,” Rep. Jim Jordan, R-Ohio, said in a statement to The Daily Signal.

“Once it expires, the question changes. Then it’s not ‘Do we keep this program running’ but instead ‘Do we re-start a program plagued by scandal and that’s unpopular with Republican presidential candidates and members of House and Senate leadership?’ That’s a very different question, and it bodes well for Americans who are fed up with the status quo.”

Lawmakers on Capitol Hill spent many of the last few months debating Ex-Im’s future. House and Senate panels with jurisdiction over the bank held several hearings examining its merits. Additionally, policymakers in both chambers introduced legislation reauthorizing Ex-Im with reforms. The Export-Import Bank’s charter expires June 30, and members of Congress—who are home for a week-long recess—have run out of time to reauthorize the bank. (Photo: Melissa Quinn/The Daily Signal)

Bank opponents believe Ex-Im—which they say functions as an engine of corporate welfare and cronyism—benefits a small handful of politically connected, large corporations.  Alongside Jordan, Hensarling led a group of Republican lawmakers in opposing the bank and moved not to advance legislation reauthorizing Ex-Im through his committee.

Also among the bank’s opponents were House Majority Leader Kevin McCarthy and Majority Whip Steve Scalise, who advocated for Ex-Im’s life to end.

Those supporting the bank, meanwhile, believe it supports jobs in the U.S. and helps small businesses compete in the global market. Ex-Im’s backers included Obama and Elizabeth Warren, though support for reauthorization extended across party lines.

“Republicans are closing the doors of a corrupt corporate welfare agency,” Dan Holler, spokesman for Heritage Action for America, told The Daily Signal. “No one on the left—not Barack Obama, not Hillary Clinton and not Elizabeth Warren—can claim to have taken a similar stand against well-connected special interests and won.” Though Ex-Im’s charter will likely expire, Congress could move to revive the bank next month by attaching reauthorization to must-pass legislation, such as a Highway Trust Fund bill.

“The highway bill, of course, will be open for amendment, and it’s pretty obvious that that would be a place for this vote to occur,” Senate Majority Leader Mitch McConnell said last week.

In the weeks leading up to Ex-Im’s expiration, the bank’s biggest beneficiaries warned of the consequences a lack of reauthorization would cause.

Officials at Boeing, which accounted for 30 percent of Ex-Im’s financing in 2013, have threatened to outsource jobs should the bank’s charter expire. Additionally, the company said Ex-Im’s expiration could put the United States at a competitive disadvantage, because other foreign countries operate their own export credit agencies.

“A suspension of the bank’s ability to do new business after June 30 is a boon to overseas competitors at the expense of thousands of U.S. exporters and the jobs they support,” said Gayla Keller, spokeswoman for Boeing, in a statement. “In the case of Boeing, inaction by Congress to reauthorize Ex-Im makes it harder for Boeing to compete with Airbus and other emerging competitors with access to multiple export credit agencies.” Both companies operate their own independent credit arms, and Boeing offered to provide aircraft financing as a “lender of last resort.”

Still, Keller noted that there are “real limits” to how much support Boeing can provide.

Ex-Im supports just 2 percent of U.S. exports, and small businesses benefit from less than 20 percent of the bank’s financing in dollars.

Despite the few businesses that benefit from Ex-Im, those that do are urging members to reauthorize the bank when Congress returns after the July 4 holiday.

Don Nelson, chief executive officer of California-based ProGauge Technologies, said Ex-Im’s end will be “devastating” for the company, according to the Los Angeles Times. The company is currently vying for a bid for a project in the Middle East, and if ProGauge’s bid is selected, it would need financing from the bank.

>>> John Kasich on Export-Import Bank: ‘Get Rid of It’