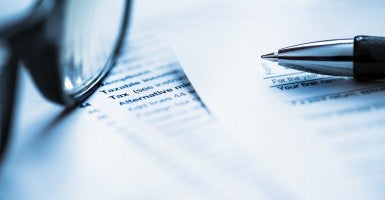 At National Review Online’s The Corner, Ramesh Ponnuru (defending Robert Stein) and Steve Moore have discussed the merits of a larger tax credit for children. Ponnuru, Yuval Levin, Stein and others have kicked off an important debate about how to structure conservative policies to help the middle class and foster upward mobility with the “Room to Grow” report.

Ponnuru and Stein make solid points on the child credit: Our fertility rates are low in the United States, and it is expensive and difficult to raise children. It’s also incredibly rewarding. But Moore is right, as an economic matter, to want to focus on reducing marginal tax rates and barriers to investment to increase economic growth for everyone.

So how did this debate begin? Stein recently proposed an increased child tax credit in the “Room to Grow” report. Stein wishes to increase the credit to at least $2,500, remove income limitations for those who take the credit and make it refundable against payroll taxes. He published a more detailed outline for tax reform along the same lines in National Affairs in 2010.

The argument for the larger child credit seems to boil down to three points: 1) it is fair; 2) it will encourage childrearing; and 3) it is popular.

It is fair, Stein argues, because government retirement programs – Social Security and Medicare – rely on today’s workers to pay for today’s retirees. That means that today’s parents are raising those who will be shouldering the load for the next generation’s retirees, including the childless. Parents are advancing our nation’s interest by ensuring a growing, or at least stable, population. The investment that parents make in raising the next generation is extremely important and valuable to the country in other ways, too—such as a ready military force.

But not everything we do that is good for the country is recognized in the tax code or otherwise compensated. And the childless have some complaints about their own tax load. Most paid taxes, mainly on the state and local level, for many years for programs for children they never used, foremost among them public schools.

The primary government burdens right now are bad policies that lead to slow growth. One of those is a complicated tax code that penalizes investment, contains the world’s highest corporate tax and has high marginal rates around 40 percent. Allowing people to keep more of their money is great and an important conservative principle, but not all tax cuts have the same economic impact.

Stein acknowledges a larger child credit in all likelihood means higher-than-otherwise-necessary tax rates on income and investment. That is a recipe for lower growth for everyone. A tax reform such as Moore advocates could increase economic growth by an extra 1 percent a year or even more. That could mean an economy that is more than 20 percent bigger by the time today’s infant is entering the workforce. Just because supply side effects might not be as obvious or as big as when President Reagan cut rates from 70 percent to 28 percent, we’re still talking about a lot of potential growth.

Stein also implies that such a tax credit would encourage parents to have more children, or at least negate the negative impact of Social Security and Medicare on fertility (.5 lower total fertility rate by one study). Assuming that research is correct, it is not clear why $2,500 or even $3,500 will be an effective counter-balance.

As Jonathan Last points out in his wonderful book “What to Expect When Nobody’s Expecting,” attempts by governments to encourage childbearing through all kinds of incentives – including Singapore’s direct cash payments of $18,000 for having a third child – have been huge failures. He concludes a chapter reviewing such efforts with, “If Singapore, with its authoritarian government and natalist bonanza – cash bonuses! tax credits! preferential housing! paid maternity leave! childcare from grandparents! – can’t convince its modern, sophisticated population to have babies, what hope does anyone have?” Based on the experiences of the countries outlined in Last’s book, it’s hard how a larger child tax credit would move the needle on fertility here.

Lastly, Ponnuru and Stein note that such a tax cut would be popular with parents. Of course it would. If a larger child tax credit made it possible to get some pro-growth tax reform, even better. One thing to consider, though, is that pushing “our” tax credit could make conservatives look a little dishonest when we’ve been arguing for fewer deductions and credits for a long time. We do not want tax credits for energy, for example, even though proponents have an argument—not one I agree with—that it is needed to make up for the externality of CO-2 emissions.

Others, even at free-market institutions, want a new carbon tax to fix that same claimed externality. Tax experts love to play with the tax code to fix all kinds of problems. We do not need a more clever code, we need a simpler one. We conservatives are on firmer ground to push for a simple tax with as few credits as possible and resist the urge to use the tax code to fix problems, whether government created or not.

A child tax credit, if not accompanied by robust reform that lowers rates and barriers to investment, will lead to sub-optimal growth, not do much to increase fertility and put conservatives on weaker rhetorical ground to oppose cronyism in the code.