Texas Won’t Wait on Washington to Secure the Border 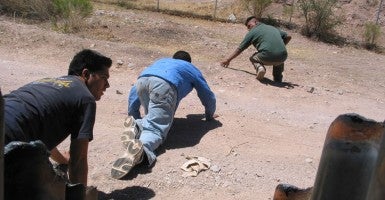 Texas officials won’t wait on the federal government to secure their southern border with Mexico. Thousands of illegal immigrants, predominantly children from Central America crossing without their parents or other adult relatives, have flooded in to McAllen and other south Texas communities in recent weeks, creating a humanitarian and security crisis.

In a letter to the Texas Departent of Public Safety, Gov. Rick Perry, Lt. Gov. David Dewhurst and Speaker Joe Straus directed the agency to begin law enforcement surge operations on the Texas-Mexico border. They will allocate approximately $1.3 million per week to fund the efforts. The trio laid out strong language challenging the lack of action by the Obama administration:

In a separate statement, Dewhurst said, “The federal government has abdicated its responsibility to secure the border and protect this country from the consequences of illegal immigration, but as Texans we know how to lead in areas where Washington has failed.”

Earlier today, the Texas Commissioner of Agriculture, Todd Staples, said in an interview that because there is so much focus on the southern border in the Rio Grande Valley area, much of the West Texas border remains porous.

Just last week, border officials in West Texas apprehended three Ukrainians crossing illegally. He said roughly 75 percent of those apprehended on a weekly basis are not from Mexico. In addition to the Ukrainians, he said illegal border crossers from Somalia, Pakistan and other countries that harbor terrorists have attempted to come through.

>>> Want to Know What’s Happening on the Border? Watch Our Hangout With Todd Staples

I’m headed to the border this weekend to see firsthand what is unfolding there. You can follow my reports here on The Daily Signal.