For Poorer Workers, the Recession Is Nowhere Near Over 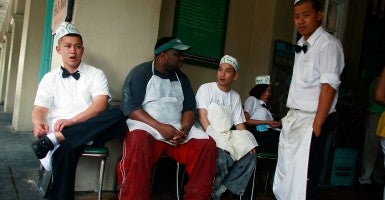 The more you play a sport or instrument, the better you get. It’s the same story with work: with more experience, workers become more productive and earn higher pay.

Sadly, during the recession the length of the average workweek shortened. While work hours have since bounced back for many employees, poorer workers haven’t seen their hours reach their pre-recession levels.

A study released by The Heritage Foundation Thursday shows how weak the recovery has been for workers in the bottom fifth of the wage distribution. Over the past six years, the percentage of workers in the bottom quintile with full-time jobs has dropped by one-tenth. These workers’ average workweek has fallen by over an hour a week since the recession began, from 33.1 hours a week to 32.0 hours a week. Of course work hours normally fall in a recession – but they also normally come back afterward.

This time, they didn’t. And that’s really hurting low-income workers: If their hours had remained at pre-recession levels, these workers would make an average of almost $500 more a year.

Less time in the workplace means it takes longer for workers to gain experience and on-the-job skills – human capital that is crucial to wage growth and career advancement. For instance, two out of every three employees who started at minimum wage make more within a year of starting working.

Obamacare will further hurt poorer workers trying to acquire more hours on the job because it penalizes employers for hiring low-wage workers full-time. The law’s penalties will soon raise the cost of hiring full-time workers in the bottom quintile by an average of one-sixth.

Unsurprisingly, many employers will respond to the penalties by hiring part-time workers. The Congressional Budget Office estimates the Affordable Care Act will significantly reduce hours worked in the economy—especially hours worked by low-income employees.

The further decline of working hours at the bottom will make it harder for low-wage workers to acquire the skills and experience necessary to get ahead. Total employment may have returned to pre-recession levels, but hours on the job have not.

>>> Check Out: Shrinking Workweeks: A Sign of Unequal Recovery from the Great Recession