Ignore the Doublespeak: We’re in a Recession 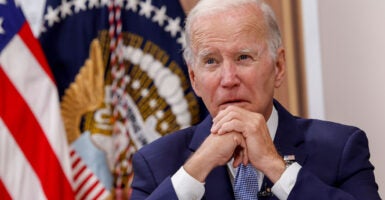 President Joe Biden, who said Thursday, “That doesn’t sound like recession to me,” seems to want us to believe the economy is in far better shape than the stark reality right in front of our faces. (Photo: Anna Moneymaker/Getty Images)

American families cannot afford what they were purchasing just a year and a half ago. That means a lower standard of living, but don’t expect any sympathy from Biden administration officials. Their focus seems to be on technicalities, not the average American’s cost of living.

The latest economic doublespeak from the Biden administration is a stern warning to not believe your lying eyes. President Joe Biden, who said Thursday, “That doesn’t sound like recession to me,” seems to want us to believe the economy is in far better shape than the stark reality right in front of our faces.

But it’s hard to ignore the latest gross domestic product data from the Department of Commerce, which shows the economy contracted in both the first and second quarters of this year, indicating that the nation is in recession.

This comes as no surprise to millions of American families who have been struggling just to buy groceries and gasoline. Real incomes—incomes adjusted for inflation—have steadily declined under the Biden administration over 6%. Meanwhile, monthly savings are down 75% and household debt has increased by $1.3 trillion.

All the while, the White House and loyal Biden sycophants throughout the government have tried to redefine the word “recession” in such a way that the newspeak version of the word coincidentally excludes the current economic contraction. The verbal gymnastics it is taking to do so would make George Orwell’s Ministry of Truth quite proud.

This is despite a 100-year precedent that every time the economy has contracted for two consecutive quarters, those occurrences have all been considered recessions. In the past 75 years, whenever inflation has been above 4% and unemployment below 4%, a recession has followed within the next two years.

Nevertheless, arguing over the precise date a recession begins makes little difference to families who can see the warning signs of what’s coming.

The entire debate about defining a recession misses the point that no amount of weasel words from out-of-touch bureaucrats can change reality. The fact is that the economy is shrinking and that means there are fewer goods and services available for people. A smaller pie means everyone gets a smaller slice, even though you may be working just as hard as you were before.

Unfortunately, rather than working to solve the problem, Biden seems to be focused on how to pretend it’s not happening. For example, Biden said, “Consumer spending is continuing to grow,” in a statement shortly after the disappointing GDP numbers were released.

However, he failed to acknowledge the growth in spending is being fueled by depleting savings and not growing incomes, an unsustainable combination. Meanwhile, business investment fell 13.5%—an ominous sign since investment is a leading indicator for future economic growth.

No one expects the administration to eliminate all economic fluctuations. But the gaslighting from the Biden administration only adds insult to injury because the nation’s current economic ills are the direct result of government failures.

The inflationary nightmare that is crushing the middle class is the consequence of the federal government spending, borrowing, and printing an extra $8 trillion.

Inflation is at a 41-year high, according to the GDP data, which means that an entire generation of Americans is experiencing the phenomenon of inflation for the first time. It’s also seeing the havoc that inflation unleashes on an economy and how it causes growth to stall.

But as if that weren’t bad enough, the Biden administration has also pursued an anti-energy agenda that has raised prices for gasoline, electricity, natural gas, and other forms of energy. Because energy affects the prices of everything, these increased costs have trickled down to goods and services across the economy, pushing up prices for anything you can imagine.

Instead of humbly acknowledging these failures and changing course, Biden administration officials have doubled down with word games and insist there is no recession, much like how they insisted inflation was transitory.

Once again, it is little consolation for the hard-pressed working- and middle-class Americans, who are trying to decide between buying groceries or gasoline because their budget is stretched beyond the breaking point.