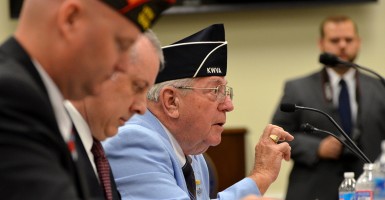 The head of a reform-minded veterans group today hailed Senate action to speed medical care to waiting veterans, but cautioned that a change allowing treatment at private health facilities must represent “real choice.”

“Getting choice is the holy grail of this reform,” said Pete Hegseth, chief executive officer of Concerned Veterans for America.

The FBI yesterday acknowledged it is investigating the Department of Veterans Affairs scandal, the same day the Senate passed the bill intended to resolve accounts of long wait times and delayed care at VA hospitals.

The Senate bill, passed by a vote of 93-3, would allow the VA to contract with private medical centers to help veterans who face long wait times at VA facilities.

A similar bill passed the House on Tuesday, representing rare cooperation between the two chambers and providing hope that Congress is moving decisively to reform the VA.

“We enthusiastically support the accountability and choice aspect of the bill,” CVA’s Hegseth said.

But Hegseth criticized “loopholes” in both bills:

“We don’t like that the VA is responsible for setting the standard for what constitutes excessive wait time. It can’t set a timeline that is most advantageous to itself and trap veterans in its [VA] facilities. It has to represent real choice.”

Hegseth also expressed surprise at the cost required to implement the Senate bill, as estimated yesterday by the nonpartisan Congressional Budget Office.

In a report, the budget office said the contracting provision could increase direct spending by about $35 billion over the next 10 years.

Both the House bill and the Senate bill allow veterans to go to civilian doctors for the next two years, if they have been waiting more than 30 days for an appointment or live more than 40 miles from a VA treatment facility.

The bills provide funding to hire new health care providers and authorize the VA to fire employees who do their jobs poorly.

The House bill would ban all VA staff bonuses through 2016.

A preliminary report released May 28 by the VA’s inspector general concluded officials at the department’s hospitals had manipulated waiting lists to cover up delays in scheduling appointments for veterans seeking medical treatment.

Comey spoke before the House Judiciary Committee in Washington.

“We will follow wherever the facts take us,” Comey said.

The inspector general’s report particularly focused on mismanagement at the VA medical center in Phoenix.

An internal audit released this week revealed 57,000 veterans had to wait at least three months for initial appointments and an additional 64,000 newly enrolled vets who requested appointments never got them.

Members of Congress say they are confident they can agree on a unified bill to send to President Obama by the end of the month.

The White House said the president supports the Senate bill.

“Our No. 1 priority is getting veterans the care they’ve earned,” a White House statement reads. “To do that, we need to make sure that the problems identified at VA medical facilities get fixed.”