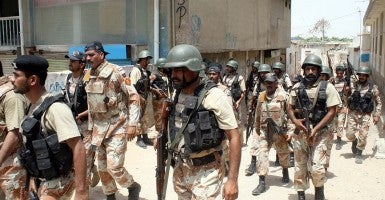 The Tehrik-e-Taliban Pakistan (TTP) is escalating its campaign of violence against the state as tentative peace talks with the government break down and the Pakistani military conducts air strikes against the group’s bases along the Afghan border. The U.S. must support Pakistan in its fight against the TTP, which seeks to overturn the Pakistani government and install a theocratic state similar to that which the Taliban formed in Afghanistan in the 1990s.

The TTP immediately claimed credit for the attack, saying it was retaliation for the U.S. drone strike that killed TTP commander Hakimullah Mehsud last November.

On Tuesday TTP militants attempted to attack another part of the airport, but were thwarted by Pakistani security forces.

The escalation in hostilities between the government and TTP will raise concerns in Washington about the stability of the nuclear armed state. After the brazen attacks, most Pakistanis will likely support aggressive military action against the TTP. Washington should be prepared to support Islamabad in the event it engages in a major military offensive against the militant group.

While partnering with Pakistan in Afghanistan has been a challenge due to Islamabad’s unwillingness to crack down on the Afghan Taliban and Haqqani Network, Islamabad and Washington are united against the TTP. The TTP was involved in the 2009 attack against a CIA base in Khost, Afghanistan and the 2010 attempted car bombing in Times Square.

Washington should pull out all stops to bolster Pakistan in its fight against the TTP,  but Pakistan must also recognize that it will not fully get a handle on the TTP threat until it works to undermine the ideology that drives all militancy in the region. Only a comprehensive and consistent policy against terrorism and the ideology behind it will prevent Pakistan from succumbing to these violent groups.