At This Ohio County Fair, Contempt for Washington 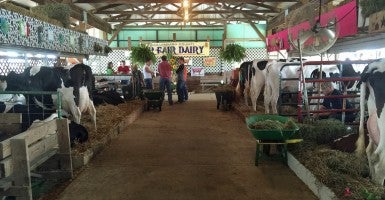 LISBON, Ohio—Prize-winning cattle are more popular than politicians at the Columbiana County Fair.

“Government is broken from the very bottom to the very top,” says Theresa Bosel of Lisbon, Ohio.

At least that was the case on this overcast Thursday afternoon, hours before 17 Republicans were preparing for two debates 90 minutes north in Cleveland. En route to cover the event, I stopped in this quaint Ohio town of 2,821 residents to hear what was on their minds—and it quickly became apparent politics wasn’t.

Lisbon, which shares its name with the capital of Portugal, is the county seat and home of the annual fair, which a waitress at the Steel Trolley Diner suggested I attend. For the price of $6, I was greeted by several barns filled with cattle, goats and other animals.

With country music blaring on the boombox and everyone’s favorite fried foods for sale, the Columbiana County Fair represents that slice of America that’s frustrated with Washington and the political class that’s running the show.

Even though Republicans were taking the stage for their much-anticipated face-off later in the day, several attendees told me they preferred to spend the evening at the fairgrounds rather than watch politicians they disdained. Many said they’ve lost faith in their leaders, beginning with President Obama.

“They’re not for the people, by the people,” John Kozic of nearby Youngstown told me. “They’re changing this country into an immoral country, moving away from the Founding Fathers’ beliefs. They’re taking God out of this country. And that’s not good.”

“It’s not a perfect world,” he added. “I understand that, but it’s gone too far to the left.” Two local residents, Henry and Bill, who declined to provide their last names, were chatting near an ice cream stand when I asked what they thought about the direction of their country.

“I don’t think we have leadership,” Henry said. Bill added, “Anything would be better than what we’ve got.”

For these two seniors, the spike in welfare is alarming. They want the government to take a harder line with Americans when it comes to work.

“We’re paying people a lot of money with government programs, and they get to vote,” Henry said. “Their vote is being bought. That’s not very good for America.”

“The more people you get back to work,” added Bill, “the more tax dollars we’ll have to pay the debt. We’ve got to get them back to work. And the ones who don’t want to work, I don’t know what to do with them.” The fairgrounds on Thursday drew a crowd that ranged from young to old. (Photo: Rob Bluey/The Daily Signal)

Before I arrived at the fair, local Republican volunteers said U.S. Rep. Bill Johnson, a GOP congressman from the district, was making the rounds. Everyone I spoke to had nice things to say about Johnson, even if they’re angry with the rest of Washington.

The local Republican Party booth was located on a corner of the fairgrounds, displaying lawn signs of local leaders. One of them, Theresa Bosel, the Columbiana County recorder, first ran for office a few years ago after spending time as a police officer and in a marketing job. “This is not the country I grew up in,” Bosel told me. “I want my country back. I want someone who is going to go to Washington and not take any BS or sweet talk. Enough is enough.”

Wellsville Councilman John Morrow, who sat with Bosel at the GOP booth, said he believes he’s making a difference at the local level but remains frustrated with the direction from Washington.

“From a village council standpoint, you have to have someone at a higher level working with you,” Morrow said. “Things like welfare we don’t have much control over, but we try to make the village a job-friendly environment.” Bosel said she doesn’t want to be known as a politician, but her role in local government makes her community a better place.

“Government is broken from the very bottom to the very top,” Bosel said. “You find me a governmental entity that operates efficiently, effectively and uses the least amount of taxpayer dollars possible, and I’ll give you my paycheck.”