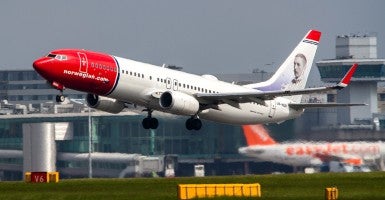 A major airline pilots union and the three big transcontinental airlines are trying to force down Norwegian as an overseas competitor. Photo: Wikimedia

A measure aimed at grounding an upstart airline offering affordable fares for transcontinental travel appears headed for a vote in the House of Representatives.

The transportation appropriations bill is seen as a vehicle for an amendment targeting Norwegian Air International’s new service at U.S. airports, airline officials were told by consultants.

Norwegian Air International, headquartered in Ireland, says it is offering economical fares and improved customer service for international travelers and providing new job opportunities in the United States. But union leaders, who have leaned on the U.S. Department of Transportation to deny Norwegian’s application for low-fare international services, claim the competing airline has engaged in unfair labor practices.

At issue are the actions of Norwegian Air International, the newest affiliate of the Norwegian Group, which obtained an air operator certificate in February from the Irish Aviation Authority in Dublin. Under the U.S.-EU Open Skies Agreement, an Irish airline can operate among all European cities and all cities in the United States.

In addition, as an Irish air carrier, NAI enjoys the full range of traffic rights to other countries available to an airline of an EU member state, which are substantially greater than the rights of a carrier of a non-EU country such as Norway.

Although NAI has the right to fly to the U.S., it first must obtain formal authorization from the Department of Transportation. NAI submitted its application in December and completed all DOT requirements in February, when it received its air operator certificate. This is where the airline is encountering some rough weather.

In an email to The Daily Signal, a spokesman for the Air Line Pilots Association International, which calls itself the world’s largest union of airline pilots, identified more than 100 members of Congress who have “weighed in with the DOT against NAI’s application for a foreign air carrier permit.”

The application to U.S. transportation officials for the EU-based Norwegian affiliate to begin U.S. operations was submitted in November 2013, company officials say.

If the lobbying efforts against NAI by the pilots union and three major U.S. airlines are successful, U.S. consumers and workers will lose out, Norwegian spokesman Lasse Sandaker-Nielsen told The Daily Signal.

“Our opposition is delaying the process,” Sandaker-Nielsen said. “This is outrageous because we have fulfilled our obligations under the Open Skies agreement.

The airline’s spokesman added: “It’s ironic that elected officials in a country where capitalism and the free market are celebrated are not making a decision based on the facts that show how we are bringing in competition, lowering prices and creating jobs. The Obama administration has been pretty outspoken about the fact that it wants more tourism coming to the U.S., and this is what we are doing.”

On American, for instance, a round-trip ticket June 2 and 9 from New York-JFK International Airport to Oslo cost about $1,440. The same flight on Norwegian went for around $862. That’s a $578 difference.

Norwegian currently has 300 U.S. employees, including 150 cabin crew members in Fort Lauderdale, and 150 in New York.

“We are absolutely hiring more U.S. employees,” Sandaker-Nielsen said. “So why would Congress want to shut down something that benefits its own constituents?”

Although Norwegian has not had access to any text proposed for the amendment to the transportation spending bill, its advisers anticipated that congressional opponents would attempt to prohibit DOT from processing the application by denying funding for this purpose or inserting language imposing requirements inconsistent with the Open Skies Agreement.

James Sherk, a labor policy analyst with The Heritage Foundation, said consumers need to be on the lookout for an anti-competition move on Capitol Hill that would put everyday Americans at a disadvantage while rewarding entrenched interests.

“Norwegian Air’s entry into the international flight market would reduce the monopoly profits of the existing airlines and pressure their unions to make concessions to reduce costs and keep customers,” Sherk said, adding:

“Neither labor nor management at incumbent airlines want that to happen. They would rather have the government shut down their prospective competitor rather than have to earn their customers’ business with better services at lower cost. If successful, they will keep international flight an expensive luxury outside the budgets of many middle class families.”