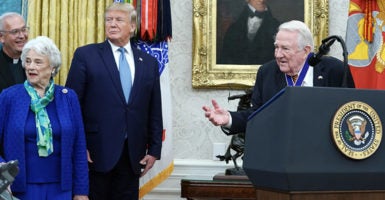 Former Attorney General Edwin Meese delivers remarks after being awarded the Presidential Medal of Freedom by President Donald Trump during a White House ceremony. His wife, Ursula Herrick Meese, is pictured at left with the president. (Photo: Chip Somodevilla/Getty Images)

Former Attorney General Edwin Meese, upon receiving the Presidential Medal of Freedom at the White House, praised the many people who helped him throughout his life—notably a future president named Ronald Reagan.

Meese was deputy district attorney for Alameda County, California, when Gov. Ronald Reagan hired the lawyer as his legal affairs secretary in 1967. Over the next dozen years, Meese would become a Reagan confidant who served first as the new president’s counselor in 1981 and, in his second term, as attorney general.

“Ronald Reagan was a pivotal part of my life, and I am always grateful to him,” Meese said after President Donald Trump put the medal around his neck Tuesday during an Oval Office ceremony.

Meese, 87, was joined by his wife of 61 years, Ursula, as well as numerous other family members, former associates, and Trump administration officials during the White House ceremony.

“Ed, you are a loyal fighter for freedom, a champion of law and order, mentor to young Americans, and faithful defender of our Republic,” Trump said, adding:

Of receiving the nation’s highest civilian honor, Meese told the president: “It’s just a great privilege that I appreciate very much, and appreciate all that you have done to make us welcome here, and, as I say, for those kind words.”

Meese, who joined The Heritage Foundation in late 1988, is currently the leading think tank’s Ronald Reagan distinguished fellow emeritus. Heritage’s Center for Legal and Judicial Studies, which Meese directed for years, is now named for him.

After playing a key role in Reagan’s 1980 campaign for the White House, Meese served as counselor to the president from January 1981 to February 1985. He then became the nation’s 75th attorney general, overseeing increased efforts by the Justice Department in counterterrorism, anti-drug initiatives, and combating organized crime.

Meese recognized several of The Heritage Foundation’s leaders during his remarks, including Heritage President Kay Coles James and the current head of the Meese Center, John Malcolm.

“I’ve known and worked with Attorney General Ed Meese for nearly two decades at The Heritage Foundation, and I feel there isn’t a recipient more worthy of this honor,” James said in a statement, adding:

Ed has lived the life of an authentic public servant, routinely putting duty to the country ahead of his own interests. From serving as one of Ronald Reagan’s most trusted advisers and helping to foster the Reagan Revolution to founding The Heritage Foundation’s Center for Legal and Judicial Studies, Ed has shown the American people the kind of successes that can be achieved when conservative principles are put into practice.

In recent years, Meese served on several government commissions, including the West Point Board of Visitors, the Iraq Study Group, the National War Powers Commission, and the FBI Counterterrorism Review Commission.

Meese also mentioned others present, including his former chief of staff, popular talk radio host and author Mark Levin, noting “this was before he became famous” to some laughter.

“I also want to mention Bill Barr, and I thank you, Bill, for this. You and I started work together in the first term of Ronald Reagan. You were in the Office of Policy Development,” Meese said. “And you’ve risen to continue the string of great attorneys general in this country, and I certainly appreciate what you’re doing now.”

Referencing controversies of the Reagan years, Meese told Barr to laughter: “I must say, from my own experience, I understand what you’re going through now.”

Meese told Trump that he has three “particularly meaningful” accomplishments so far as president.

“You have appointed these outstanding judges now, which is a monument to justice and the rule of law that will last literally—literally, for decades.”

The second big accomplishment, Meese said, has been the Trump administration’s emphasis on religious liberty. Finally, he said, he is grateful for Trump’s support for rebuilding and modernizing the military.

Trump noted during his remarks that The Heritage Foundation has helped him to identify strong selections for the judiciary.

“I will say, Heritage has been very helpful with us also, as you know, and I just had, on that desk, a little while ago, another six,” Trump said. “And we’ll be up to, very soon, about 182 federal judges [appointed] and two Supreme Court judges.”