What’s Left of Libya Is Crumbling 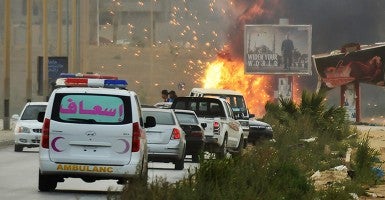 Libya remains in perpetual crisis. Internal strife is wreaking havoc on the nearly non-existent state. Fiefdoms under militia rule have been created around the major population centers in Libya.

There are rumors that the newly elected prime minister, Ahmed Maiteg, rose to the position through the support of the Islamist-dominated parliament and an Islamist militia. The legality of the new prime minister’s authority has been questioned by the incumbent prime minister, Abdullah al-Thinni. Libya’s supreme court is expected to rule on the legality of Maiteg’s election later this week. Elections for a new legislature are to be held at the end of June.

Meanwhile, the violence rages on in the eastern city of Benghazi, where former army chief Khalifa Haftar is leading a campaign against the Islamist militias, including Ansar al-Sharia in the east. Haftar claims that his country’s instability has been caused by the Islamist militias. Haftar is also a naturalized American citizen and received U.S. training in guerilla tactics after his capture during Libya’s failed intervention in Chad in the late 1970s. Reports indicate that Haftar was trained in the U.S. to lead a rebellion against Muammar Qadhafi in the early 1990s.

Haftar has garnered support from the remnants of Libya’s official military and a coalition of anti-Islamist politicians and diplomats that include the secularist National Forces Alliance, the Libyan ambassador to the United Nations, and the eastern separatist leader Ibrahim Jathran. Haftar is also drawing support from the powerful Zintan based- militias, including both the El Qaqa and El Sawaiq brigades. Haftar’s campaign to bring stability to the war-torn country is resonating with many Libyans.

Haftar’s conflict with the Islamists extends well beyond the confines of Benghazi and eastern Libya. The Zintan-based militias are located in western Libya and have their eyes on Tripoli. Haftar’s allies have even attempted to shut-down Libya’s legislature.

For now, the influential Misrata militias are sitting this round of violence out, refusing to side with Haftar, the Islamists, or the government. The U.S. appears to be sitting on the same fence, unsure if Haftar is a stabilizing force to eliminate extremism, a secularist democratizer, or a military strongman. Haftar is blazing a trail through Libya, but chaotic and militia-driven violence will not bring stability to Libya or the region.

Even if Haftar defeats Ansar al-Sharia, it will likely seek ungoverned space elsewhere in the region. Thus, both Algeria and the Tunisia have sent more than 5,000 troops each to their borders for fear of spillover violence.

The recently agreed upon elections to be held at the end of June will serve as important road marker for Libya’s next governance phase, yet elections will matter little if people are insecure. Haftar might be the best hope for stability, but his operation will require much more than a military comprised of weakened armed forces and rag-tag militias.