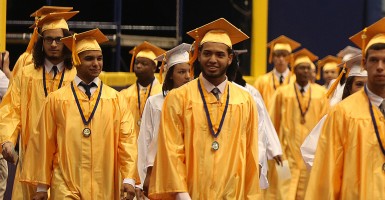 Common Core’s national standards are an effort to define what every child in the nation should learn to be considered “college and career ready.” But content matter experts have serious concerns about the impact Common Core will have on the rigor of college-level work down the road.

According to a Pioneer Institute study, “Lowing the Bar: How Common Core Math Fails to Prepare High School Students for STEM,” Common Core does not prepare students for admission into highly selective four-year universities and STEM (Science, Technology, Engineering, and Mathematics) programs. Rather, the standards are geared toward community college or non-selective university preparedness.

Even Jason Zimba, the lead writer for the Common Core mathematics standards, admitted as much during a meeting of the Massachusetts Board of Education. He noted that Common Core includes “a minimal definition of college readiness” that was not designed to prepare students for admission to selective colleges.

Furthermore, traditional liberal arts models of schooling often promote humanities-based college and career readiness, but that is not the model of the Common Core.

As University of Arkansas professor emeritus and former Massachusetts education reformer Sandra Stotsky argues, Common Core’s diminished emphasis on literature “makes it unlikely that American students will study a meaningful range of culturally and historically significant literary works before graduation.” Indeed, Stotsky says this emphasis on “informational texts” and subsequent loss of literature “may lead to a decreased capacity for analytical thinking”—which is what Common Core proponents argue promotes college and career readiness.

As former U.S. Department of Education official Ze’ev Wurman explains: “Everything will align – including private schools, including charter schools, because they want to get their kids to college. It used to be that the ACT could do what the colleges demanded of it. Suddenly the ACT is going to do – it’s actually done already – what the K-12 system demands of it. Same with SAT.”

Common Core proponents insist on the academic strength of these standards, but the content matter and redefinition of “college-readiness” create new causes for concern.