For Congressman Behind Bill to Save Charlie Gard, It’s Personal 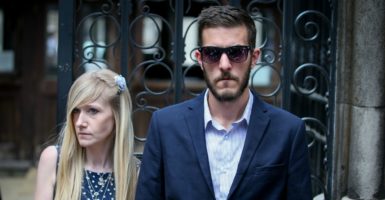 Chris Gard and Connie Yates outside the Royal Courts of Justice in London during their battle to get experimental medical treatment for their infant son, Charlie Gard. (Photo: IMP Features / Splash News/Newscom)

One of two House Republicans who introduced a bill in hopes of saving the life of a terminally ill British infant has a personal reason to do so.

More than 20 years ago, doctors diagnosed his younger sister as having leukemia, Rep. Brad Wenstrup, R-Ohio, told The Daily Signal. But the family’s insurance company wouldn’t cover a bone marrow transplant that was considered an experimental procedure.

In the U.K., Charlie Gard, 11 months old, has a rare genetic condition that keeps him from breathing without help. He is also deaf and blind.

The bill introduced Tuesday by Wenstrup and Rep. Trent Franks, R-Ariz., would grant lawful permanent residency in the U.S. to Charlie and his family so they could seek treatment here.

In a phone interview, Wenstrup told The Daily Signal:

I was drawn to this because my younger sister was diagnosed with two forms of aggressive leukemia … and [the doctors] said the only real cure for this would be a bone marrow transplant. And the insurance company said no, that is experimental and we are not going to cover it.

And we had to fight it, and we did the bone marrow transplant. We got partial coverage from the insurance company and we paid the rest … and 23 years later, she is married and she’s a wife and a mother of two children.

Wenstrup, 59, is a podiatric physician and Army Reserve officer who served as a combat surgeon in Iraq. He was first elected in 2012 to represent his Cincinnati-based district. They have raised over $1.7 million on the crowd-funding site GoFundMe for expenses related to his treatment.

By making Charlie a legal permanent resident of the United States, the bill introduced Tuesday “gives him many of the opportunities of citizenship, which would be to come here, stay here, and get care,”  Wenstrup said.

“Charlie’s parents are being denied the possibility of treatment and a cure, when there is a potential cure out there,”  he said.

Despite Charlie’s heartbreaking condition, his parents have refused to give up hope. We’re offering our support ? https://t.co/uoV7jF9WpX

The European Court of Human Rights decided June 27 that Great Ormond Street Hospital could remove life support from Charlie, as it planned to do. The London facility has cared for Charlie since October.

A British judge decided Monday that Gard and Yates have until Wednesday afternoon to submit what he called “new and powerful evidence” that their son should be kept alive through experimental treatment, Fox News reported. A second hearing was scheduled for Thursday afternoon.

The Wenstrup-Franks legislation essentially would make Charlie a U.S. citizen so he would be free to receive care here.

Connie snapped this photo as I was sharing a moment with baby Charlie #IAmCharlieGard pic.twitter.com/T5ZZnt1nwS

The House’s Republican leadership will decide whether and when to advance the legislation.

The measure is what is called a “private law” applying to specific circumstances. The Congressional Research Service defines such legislation as “premised on the idea that general law cannot cover all situations equitably, and sometimes Congress must approve legislation to address unique problems that public law either created or overlooked.”

“Apparently there have been 170 private laws enacted between ’86 and 2015, with 94 of those involving immigration,” Wenstrup said.

The situation must be hard for Charlie’s parents, he said:

This mother carries this child for nine months in her womb, and his mother and father are trying to do everything they can to try and save the life of their child. I just feel very much for the parents, it must be extremely frustrating.

Wenstrup called for prayer for the sick infant.

“Much is going to depend on what happens in Great Britain,” he said. “Pray for Charlie.”