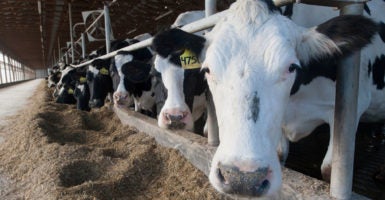 Livestock farmers show that the government doesn't need to offer so much assistance to farmers. (Photo: Edwin Remsberg/agefotostock/Newscom)

The Heritage Foundation’s Daren Bakst appeared on The Daily Signal podcast on Wednesday to discuss the farm bill. Here is a lightly edited transcript of that conversation.

Katrina Trinko: The House is expected to vote on the farm bill this Friday. Now, the farm bill is actually a pretty huge bill. It includes both funding for food stamps and agriculture issues. But here to talk about the agricultural issues is Daren Bakst, a senior research fellow at The Heritage Foundation. Daren, thanks for joining us today.

Bakst:  Thanks. It’s great to be here.

Trinko:  Daren, why should conservatives care about the farm bill? If you’re not a farmer, why does this matter?

Bakst:  Well, first of all, on the farm subsidy side, it costs a lot of money. The farm subsidies cost about $15 billion a year and on top of that, when you subsidize something you distort the decisions that are being made by farmers. So instead of responding to what the market wants in terms of crops and food, they respond to the subsidies.

And logically that makes sense. If you’re going to subsidize something the farmer is going to farm [for] the subsidy instead of farming to meet the consumer demands.

And what does Congress do? They create new programs to spend hundreds of millions of dollars to get people into farming. So we create a program to solve a problem that created in the first place.

Daniel Davis: So what do these subsidies look like for farmers? Is it just a bag of money to go and do X, Y, and Z? Whatever Congress wants you to grow in your farm?

Bakst: Well, there are two different types of commodity programs. There’s what’s called Title 1, which is a bunch of price supports and all kinds of commodity programs that help farmers when prices get too low or they don’t meet their expected revenue. That also includes the sugar program as well—[which] is a very egregious program where the government is literally intentionally trying to drive up sugar prices by limiting how much sugar can be sold. It is the very antithesis of what a conservative should be.

Then on the other side you have the Federal Crop Insurance Program and there taxpayers pay about 62 percent of the premiums for the crop insurance policies. So farmers only pay a third of the premiums. That would be nice if that’s how my auto insurance worked and taxpayers paid two-thirds.

Between the commodity programs and the crop insurance that’s where really the heart of the alleged so-called safety net is. I think it’s really important for people to recognize that almost all the farm program support goes to just six commodities. So the Congressional Research Service came out with a report and said that 94 percent of farm program support went to just six commodities—corn, wheat, rice, soy beans, cotton, and peanuts—and they only account for about 28 percent of the production.

In other words, almost all of agriculture and almost all commodities and most farmers aren’t getting subsidies or they get very little.

So really what the safety net and the subsidies are doing is you’re getting multiple programs going to a handful of farmers who are growing a handful of commodities.

And the question is: Why do they need subsidies when almost everybody else in agriculture doesn’t?

Trinko:  So obviously the farm plays a pretty pivotal role in American history. I think we all look back in the family farm. We’ve now got all these millennials getting married in barns. Why does it not make sense at this point in time to keep these subsidies going?

Bakst: Well, in the 1940s, farm subsidies were actually designed to be a social welfare program as well as a kind of help because at that time farm households had real deep poverty. They had half the household income of other households in the U.S.

In fact, about a third of the commodity subsidies go to what are called large family farms … [where] their farm household income is about three times the median income for all households.

Bakst: It was $347,000. And their wealth is about $3.8 million and it’s about 39 times the median wealth of all U.S. households. And these are farms that are getting a lot of the subsidies.

So certainly not a welfare program. I want farmers to be wealthy, have all kinds of great … all kinds of income. But when you hear kind of the sob stories and these myths that get thrown out to try to justify subsidies it’s important to bring out who’s actually getting the subsidies.

Davis: So those who advocate for these subsidies say that without them farmers will suffer and they’ll go under and we need them to stay in the long run. So given the subsidies it sounds like what you’re saying is that’s just not the case.

Bakst: What’s interesting is if that’s the case we wouldn’t have … What about the livestock producers who get little to those subsidies? Or the [farmers of] specialty crops or fruit, nuts, vegetables.

So most of agriculture production, like I said, aren’t getting much in terms of subsidies. So if that argument is true, they wouldn’t have really exist or wouldn’t be growing anything. To me that’s one of the easiest arguments against that argument you just made.

But the truth is, I think there’s this assumption that farmers are just not capable of operating the marketplace like anybody else. But the reality is they’re very sophisticated business people.

We shouldn’t insult them by thinking that they need these handouts in order to compete. The reality is they don’t. They’re very innovative and they would succeed fine without the subsidies.

But it’s important to note that right now while I would like to see us move away from subsidies, the reform ideas that exist right now are not to get rid of everything all at once, but to start moving away from it.

There are just some commonsense reforms out there that really wouldn’t have that much of an impact on farmers, but would have a big impact on taxpayers and consumers.

Trinko: So what would some of those reforms be?

Bakst: Well, I think one reform is … I was talking about the Crop Insurance Program before and the fact that taxpayers pay about 62 percent of the premiums for those. Well, reduce that to about half.

I don’t think it’s a lot to ask for farmers to pay half of their premiums and that would save … If you reduce it by 15 percent, [that would result in savings of] about $9 billion over 10 years. So significant savings. It would have almost no impact on farmers.

Come on. I mean it’s an obvious commonsense reform. President [Donald] Trump included it in his fiscal year 2019 budget. President [Barack] Obama has talked about reducing premium subsidies in his budgets. [The Government Accountability Office] identified it. CBO has identified it. So reform on the left and the right that pretty much everybody supports … It’s just indefensible not to adopt something like that.

Trinko: The farm bill that is coming for a vote doesn’t include it, right?

Bakst:  The farm bill in its current form doesn’t. There is an amendment that’s been introduced … We’ll have to see. It’s playing out right now what amendments would be considered.

So that’s one key reform. There are a couple of others. I should point out the sugar program, for example. The sugar program intentionally restricts supply of sugar. It drives up prices. You’ll hear that it’s a no-cost program, which is funny because what they’re saying is that it’s … no cost to taxpayers even though it is to some extent.

But it’s about $3.7 billion cost to consumers every year. It is … a real cost, significant cost to the industries that use sugar, which are much bigger and employ a lot more people than the folks that are the sugar growers and producers.

So we’re hurting these industries that use sugar and we’re hurting consumers. But I think what’s really important is that … if you want to identify one policy in the farm bill that hurts the poor, this is one of those policies right here because when you drive up food prices it has a disproportionate impact on low-income households because they spend a greater share of their income on food. So it’s basically a hidden regressive tax on consumers and particularly, it hurts the low-income households.

Davis: Is there any amendment to reverse that to reform that?

Bakst: Yeah. There is … I would have liked to see an amendment to get rid of the sugar program, but there’s an amendment to reform it. And it would get rid of these supply controls that limit how much sugar can be sold. It doesn’t … There are still restrictions on imports as well that still remain in place, so it’s not perfect, but at least it moves in the right direction.