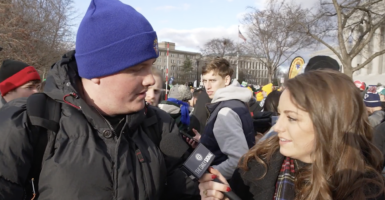 Students from across the country flocked to the March for Life on Jan. 20, 2023. Pictured: Mary Margaret Olohan, senior news producer for The Daily Signal, asks a pro-life University of Florida student why he marches for life post-Roe v. Wade on Jan. 20 in Washington, D.C. (Photo: Tim Kennedy/The Daily Signal)

Students from colleges and universities across the country revealed the reasons they traveled to Washington, D.C., for the 50th annual March for Life on Friday.

“It’s so important to have representation at the elite universities of our country,” a male Princeton student told The Daily Signal.

Students from Wellesley College for Life, the only pro-life club at the women’s liberal arts college, drove nine hours from Boston to attend the historic march.

“It was definitely worth it,” one student told The Daily Signal. “It is most of our first times.”

“It’s obviously a really significant march—the first time after Roe was overturned and the 50th march too, so we really wanted to make time to be here,” the student added.

The Wellesley student said abortion is a widely debated subject on college campuses and an issue with personal significance for many Americans.

“[Life] is the most important right to fight for,” she said.

A young woman from Notre Dame said being pro-life at the Indiana university is both a blessing and a challenge.

“There is a really strong pro-life community at Notre Dame,” Madeline Murphy said.

Murphy said 700 individuals from the Catholic institution—including faculty, seminarians, and students from Notre Dame Right to Life—marched on Jan. 20. Murphy told The Daily Signal that pro-life ideas are thriving on campus.

“The Catholic Church does not support abortion,” Murphy said. “There is no such thing as a pro-choice Catholic.”

“No club is allowed to have the fact that they’re pro-choice in their mission statement or any part of their club activities,” Murphy added.

A female student with Pennsylvania for Human Life told The Daily Signal she marches to speak for those who cannot defend themselves.

“All unborn children [should] have a voice,” she said.