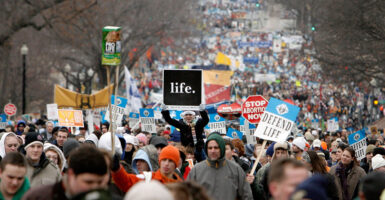 Organizers at the March for Life celebrated the overturn of Roe but reminded marchers that “the necessary work to build a culture of life in the United States of America is not finished.”

“Rather, it is focused differently,” the March for Life website says.

“Our most important work is changing hearts and minds,” the organization continues. “The goal of the national March for Life is to not only change laws at the state and federal level, but to change the culture to ultimately make abortion unthinkable.

“The world changed when on June 24 the SCOTUS issued the Dobbs v. Jackson Women’s Health Organization decision allowing the people, through their elected officials at the state and federal level, to impact pro-life law,” Mancini said in a Friday statement.

This is a breaking story and will be updated.