Post-Roe, Why We Still March for Life 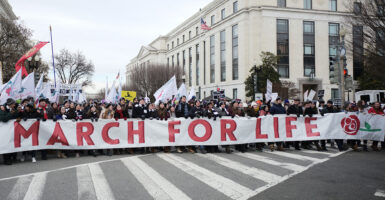 Pro-life advocates will be marching in Washington, D.C., on Friday, because babies are still dying from abortion, even in post-Roe America. (Photo: Mandel Ngan/AFP/Getty Images)

Kristen Eichamer is a senior media analyst at The Heritage Foundation.

For 49 years, Americans from across the country have traveled to the nation’s capital and called for the Supreme Court’s 1973 Roe v. Wade decision to be overturned.

Now that Roe v. Wade has been relegated to the ash heap of history, it’s understandable to ask, “Why are we still marching?” The short answer: Babies’ lives are still being ended in the womb every day.

The joy of Roe v. Wade being overturned cannot be overstated. The Catholic News Agency reported in October that already 10,000 lives have been saved because of the high court’s decision to overturn Roe v. Wade. The lives saved are both something to celebrate and a reminder that the pro-life movement’s work is far from over.

Americans in every state across the country—and their elected leaders—now have the power to choose whether they will protect the most vulnerable through laws banning—or at least restricting—abortion. Already, about a dozen states have made the choice to protect life beginning at conception, and the pro-life movement will continue its work until every state in America has similar laws on its books.

Instead of marching to the Supreme Court on Friday, the crowd of pro-life advocates will march from the National Mall to the U.S. Capitol building to remind their elected leaders that it is now their responsibility to be a voice for those who have none.

The 50th March for Life will be a great celebration of the ending of Roe v. Wade, and a great call to action as we enter a new era in the fight for life in the states. The prayer is that one day the March for Life will be unnecessary because all of America will recognize that a baby in the womb is a unique human life worthy of protection.

That day has not yet come, so we keep marching.

On today’s edition of the “Problematic Women” podcast, we explain the importance of the annual March for Life.

Also on today’s show, we discuss new research that shows Americans are $7,400 poorer under the Biden administration. And classified documents were found in President Joe Biden’s possession in November, but the public did not find out until two months later. We’ll explain why it matters. Plus, we share how the classic movie “Titanic” is answering one of fans’ biggest questions and complaints about the film. And as always, we’ll be crowning our “Problematic Woman of the Week.”