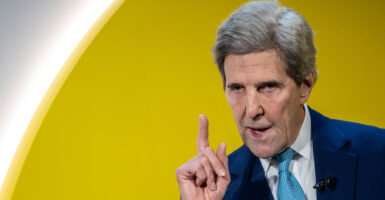 During his remarks Tuesday at the World Economic Forum meeting in Davos, Switzerland, John Kerry, President Joe Biden’s climate envoy, rather absurdly declared that “it’s so almost extraterrestrial to think about saving the planet.”

Indeed, Kerry’s assertion sounds so alien, particularly considering the reality of how China, the world’s top polluter, has avoided paying for climate damage.

According to a recent World Bank study, China emits 27% of global carbon dioxide and one-third of the world’s greenhouse gases. That exceeds those of the U.S. and other developed countries combined.

More specifically, in its Global Energy Review: CO2 Emissions in 2021, the International Energy Agency points out in detail:

The rebound of global CO2 emissions above pre-pandemic levels has largely been driven by China, where they increased by 750 million [tons] between 2019 and 2021.

The emissions increases in those two years in China more than offset the aggregate decline in the rest of the world over the same period. In 2021, China’s CO2 emissions rose above 11.9 billion [tons], accounting for 33% of the global total.

China’s environmental abuses and destruction are not so “extraterrestrial” and must be addressed if Kerry and a select group of human beings he described during his World Economic Forum speech really intend to “save the planet.”

While the Chinese people have suffered the worst environmental impacts of its actions, Beijing also threatens the global economy and global health by unsustainably exploiting natural resources and exporting its willful disregard for the environment through various illiberal policies.

Tragically, the Chinese Communist Party represses civil society and a free press, slowing changes that would benefit the Chinese people and people all over the world.

From a broader perspective, economic growth and environmental governance are not mutually exclusive. Both prosperity and the environment can surely flourish side by side.

Fundamentally, a nation’s capacity to grow, prosper, and safeguard the environment hinges on the quality of its institutions and economic system, as shown by The Heritage Foundation’s annual Index of Economic Freedom, which measures economic governance in key areas related to economic growth and prosperity. (The Daily Signal is the news outlet of The Heritage Foundation.)

China’s economic freedom has grown over the past few decades at a snail’s pace. Beijing has long taken credit for China’s economic success and wishes to keep it that way. However, the Chinese Communist Party has never abandoned its authoritarian ideology and approach.

Chinese President Xi Jinping has successfully institutionalized the party’s new paradox between craving greater control that puts the party above all and the pursuit of much-needed positive economic outcomes, which has been increasingly challenging.

Kerry said that he hopes the resumption of Washington’s diplomatic talks with Beijing can make a “huge difference” to “save the planet.” But it would be better for him to remember that the ever-greater control of the Chinese Communist Party under Xi—which has increasingly suffocated the intellectual, social, and economic freedom of the Chinese people—is at the core of all the issues that Washington must deal with in shaping its actions toward the communist regime, whether environmental or economic.