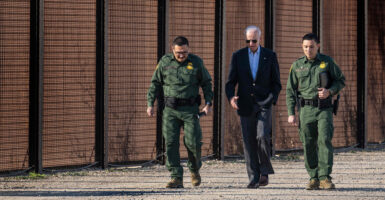 The primary policy of the Biden administration has been to create the illusion of normalcy and expect the compliant media to smooth out the rough edges for it.

During his southern border photo-op visit on Sunday, President Joe Biden threw out this whopper: “Our problems at the border didn’t arise overnight, and they’re not going to be solved overnight. It’s a difficult problem.”

Actually, they did start almost overnight—and dramatically so, practically from the moment Biden became president in January 2021. In fact, he hasn’t just ignored the illegal immigration crisis, he created it.

Biden’s border visit came following two years of a historic and escalating disaster that developed under his watch from almost exactly the moment he became president.

Immediately, masses of people began showing up at the border, many wearing pro-Biden T-shirts and signs saying, “Biden, please let us in!”

In his first 100 days in office, Biden signed a slew of executive orders that intentionally weakened border enforcement. He curtailed the “Remain in Mexico” policy that mandates asylum-seekers stay in Mexico as they wait for their claims to be processed. The policy has remained on a legal seesaw since that time. He has generally signaled to would-be illegal immigrants that if they break into the United States, they may be detained, but they won’t be deported.

So, it’s no surprise that there has been a sustained increase in illegal alien border encounters. We set a record in 2021 of more than 2 million migrant encounters at the border in 2021, over 500,000 more than the previous two years combined.

That record was shattered in 2022 with 2.76 million illegal immigrant border crossings.

Though the Supreme Court ordered the continued use of Title 42, the public health measure that allowed quick deportation of illegal immigrants, the administration is using it less and less.

Given the current trajectory, we’ll set a new border-crossing record in 2023 as well.

So, as far as Biden’s belated visit to El Paso is concerned, Texas Gov. Greg Abbott, a Republican, said it best: “$20 billion too little, two years too late.”

What the Biden administration and some in the corporate media at one time assured us was a “seasonal” phenomenon turned into the worst border crisis in decades. In fact, it might be the worst in our history.

Yes, there are big problems in Central and South America that drive people to want to come to the United States, but that doesn’t mean that the situation is entirely out of the administration’s control.

Even Biden’s Border Patrol chief admitted in July that the surge in illegal immigration is because people think the administration will let them stay in the country. That isn’t rocket science.

As with Biden’s Afghanistan withdrawal debacle, are we really supposed to believe that shambolic is the best we can do?

What we are seeing on the border might in part be incompetence on the part of the administration, but it seems mostly to be willful incompetence.

“It is becoming harder and harder not to conclude that the border crisis is intentional. I mean, nobody is this incompetent, right?” Sen. John Kennedy, R-La., said at a December press conference. “The Biden administration’s position on Title 42, on the Remain in Mexico program … none of the president’s positions on this make any sense to me unless I view it from the perspective of, well, maybe he wants this to happen.”

Mexican President Andres Manuel Lopez Obrador actually thanked Biden on Tuesday for being the first president “in a very long time” to not build even a “meter” of border wall. That, while demanding amnesty for Mexican illegal immigrants to the U.S.

The administration has proven adept at springing into action to create just the right optics for any occasion to deflect blame.

Besides the illegal immigration explosion, do you know what also took place overnight? Cleanup of the migrant camps in El Paso just before the president arrived.

Yes, it all had to look nice and clean for Biden’s Gilligan-esque three-hour tour so you don’t get the impression that the border situation is out of control and intolerable.

That’s not leadership. It’s cynical politics at its worst, but this is who Biden has always been. He is who we thought he was.