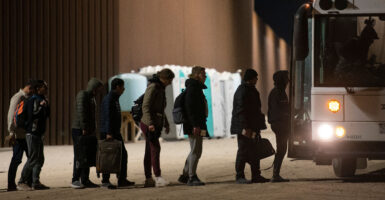 What's inhumane is the Biden administration's creation of a border nightmare of epic proportions. Pictured: Illegal immigrants board a bus Dec. 26 after being processed by border protection agents at a gap in the border barrier near Somerton, Arizona. (Photo: Rebecca Noble/AFP/Getty Images)

As President Joe Biden briefly toured a small segment of the southern border Sunday and talked about why the illegal immigration crisis there is not really a crisis, and if it is then it isn’t his fault, other interesting developments highlight the depth of the problem.

You can be forgiven if you didn’t know at all that Polis was busing these illegal immigrants north. It’s not like it got waves of hysterical media coverage. Sure, some news outlets did cover the issue, but the framing was just a bit different than when Republican governors sent illegal immigrants elsewhere.

Polis stopped his busing policy, it seems, because New York Mayor Eric Adams and Chicago Mayor Lori Lightfoot made a huge stink about it. Still, it’s noteworthy that a Democrat governor even would try to bus migrants out of his state as Republican governors have recently.

First, the obvious media hypocrisy. It’s no secret that most corporate, “mainstream” media outlets are biased against Republicans and conservatives. It’s still noteworthy how so many journalists and commentators flew into a tizzy when they caught wind of Republican governors’ transporting illegal immigrants to other states.

According to celebrated documentarian Ken Burns (“The Civil War,” “Baseball,” “Jazz”), this was basically a foreshadowing of the United States turning into the Third Reich or something.

“This is coming straight out of the authoritarian playbook,” Burns said on CNN after Florida Gov. Ron DeSantis, a Republican, sent roughly 50 illegal immigrants by plane to Martha’s Vineyard, a posh Massachusetts vacation spot known for its left-wing politics.

“What we find in our all films is that the themes that we engage in the past are present today,” Burns said. “And so, when you look at the story that we’re telling of the U.S. and the Holocaust, you understand that the time to save a democracy is before it’s lost. We promise you.”

The idea that overwhelmed border states—abandoned by a presidential administration that largely refuses to enforce immigration law—would offload some of the problem on northern, blue, sanctuary cities as an act of defiance and desperation was treated, with the media’s help, as an example of how evil and heartless Republicans are.

Funny you didn’t hear any of this commentary about a Democrat.

Polis tried to spin the situation to make it seem like what Polis was doing was markedly different from the actions of Republican governors.

“No one should play politics with the lives of migrants who came here to escape oppression, and in Colorado, we are honoring our values of treating people with dignity and respect,” Polis said in a prepared statement Jan. 3.

The Colorado governor then got to the crux of the matter.

And there you have the seeds of truth. States and cities—red and blue—indeed are being overwhelmed, and the federal government under Biden does need to step up. It could do that by enacting better border security. Period.

The second issue is much bigger than media hypocrisy. Polis’ actions demonstrate the depth of the issue at the border.

Colorado isn’t even getting the worst of the surge in illegal immigration, since it’s not on the border. But the state is still swamped.

The Denver Post reported at the end of December that housing costs for illegal immigrants in Denver had reached $3 million. Denver’s Democrat mayor declared a state of emergency.

This was likely just the beginning. Hundreds of new arrivals have been coming daily across the U.S.-Mexico border.

The reality is that border states—and states close to the border—are completely overwhelmed by a crisis that they didn’t create and are unable to handle.

Worse, the Biden administration actively impedes these states from doing anything about it. When Arizona used giant shipping containers to make up for gaps in the border wall, the administration sued.

So don’t get your hopes up after Biden’s border visit.

The president’s highly sanitized photo-op offered no solutions that actually would get the border problem under control. Instead, it’s the typical, cynical nonsense and empty platitudes we’ve been fed since Biden arrived in the Oval Office.

As I wrote recently after the U.S. government’s Title 42 policy was upheld by the Supreme Court, the human tidal wave at the border won’t abate until there is a fundamental change in the way the Biden administration takes on enforcement.

Human traffickers and would-be illegal immigrants must believe that they not only will be stopped and detained at the border, but will be quickly deported as well.

What we have under Biden effectively is a return to the catch-and-release policies of President Barack Obama, whom he served as vice president for eight years.

This problem is not just up to beleaguered Border Patrol agents to enforce; it requires a presidential administration that actively desires to shut down illegal immigration. Saying over and over again that the border is “secure” won’t make it so.

The massive omnibus spending bill—passed in the final days of the lame-duck session of Congress—devoted very little money toward border security, but it did bail out sanctuary cities. Again, this signals that the federal government is more focused on mitigation than enforcement.

What’s truly inhumane is not Republican and Democrat governors’ busing migrants to other states. No, it’s an administration that has created the conditions for a border nightmare of epic proportions.