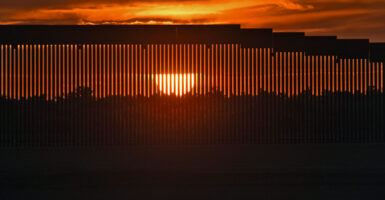 The Biden administration wants you to pay no attention to that mess on the border.

Texas Gov. Greg Abbott, a Republican, ordered a shutdown on Thursday of six points of entry on his state’s border due to an overwhelming surge in migrants. He then reversed the decision hours later, saying in a statement that President Joe Biden “has now flip-flopped to a different strategy that abandons border security and instead makes it easier for people to cross illegally and for cartels to exploit the border.”

It’s not hard to see why Abbott wanted to take drastic action.

Photos and videos of the International Bridge in Del Rio, Texas, show thousands of migrants—mostly from Haiti—clustered at the border.

Even the Democrat Del Rio mayor is pleading with the administration for help.

To make matters worse, the number of people gathered at the Del Rio bridge is seemingly surging by the hour.

One would think this deplorable situation would necessitate swift and decisive action from the Biden administration to resolve the issue and give aid to Texas and Del Rio.

Well, the response was certainly swift. According to Fox News national correspondent Bill Melugin, the Federal Aviation Administration put a ban on flying drones over the area that the migrants are congregating citing a “special security reason.”

Perhaps there are serious reasons to suddenly shut off media access to taking drone videos of the situation. However, given the other lack of action on the issue from the administration it certainly looks like a convenient excuse to stop negative coverage as Sen. Tom Cotton, R-Ark., and others noted on Twitter.

Fox News had an incredible response to the FAA order.

It seems the Biden administration’s real problem with the border crisis is that some media outlets have dared to extensively cover it. If you were only plugged into mainstream liberal media coverage, you’d probably have little idea that anything at all is happening at the border.

A historic flood of people illegally pouring into our country during a pandemic is back-page news, apparently.

But for those who’ve been paying attention it’s hard to deny that the situation at the border has become an unmitigated disaster, almost from the moment that Biden became president. The number of border crossings and apprehensions have hit numbers not seen in decades.

In fact, in July, the number of border apprehensions hit the highest point in 21 years, with more than 200,000 people arrested. This, despite the fact that July is typically a slow month as far as border crossings typically go, due to the extreme heat.

So much for the “seasonal” surge theory promoted by the Biden administration and its media allies.

In August, the border crossing number looks roughly the same, with only a small dip.

It didn’t have to be this way, but the Biden administration changed the policies of the previous administration that were reducing illegal immigration while rhetorically signaling that they would take a less restrictive approach to the issue.

No surprise that we are now stuck with a huge mess.

As I wrote previously, Biden’s failure at the border is exhibit A of his toothless Caesarism. While the administration is stretching its powers well beyond its constitutional limits in a growing number of domestic matters, it’s also failing to uphold its basic duties to the law and the American people.

The Biden administration has been relentless in its messaging about the COVID-19 pandemic and how it justifies extreme measures to suppress to the point of using a national vaccine mandate.

Yet, it’s unwilling to take steps that worked under the Trump administration to get the border under control. In its failure to do so, it has not only created a situation of dangerous lawlessness at the border, but has put Americans at a greater health risk to boot.

Many of those detained in the U.S. have not received COVID-19 testing and are often placed in crowded facilities. A recent Department of Homeland Security Inspector General report concluded that the procedures now in place at the Southern border are a serious health risk.

So much for stamping out the pandemic by any means necessary.

In his recent caustic speech announcing the national vaccine mandate, Biden said threateningly to Americans who haven’t taken the vaccine: “We’ve been patient, but our patience is wearing thin.”

Will the president’s patience ever wear thin regarding the hundreds of thousands of illegal immigrants crossing our border every month, most of whom are unvaccinated?

Nope. Not at all. Nothing to see here.

If anyone’s patience should be wearing thin, it should be the patience of the American people who are being tested by the president’s impressive displays of fecklessness since taking office.