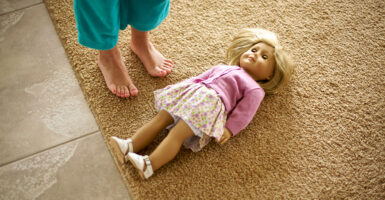 It was Christmas 2001 and I was 8 years old. Running down the steep steps of my family’s New England home, I barreled into the living room to find wrapped presents plus one unwrapped gift by the fireplace—Josefina, an American Girl doll.

I spent hours of my childhood playing with Josefina and a collection of other American Girl dolls that my doting grandmother graciously gifted my sister and me.

The dolls were a source of creative play, but also education. I learned a great deal of American history, from the abolition of slavery to the Great Depression, through the books of historical fiction that accompanied each doll.

But the company that used to be focused on teaching young girls courage through history today is telling them that they can change their gender.

“The way you show your gender to the world through clothes and behavior is your gender expression,” one page reads, as seen in a photo originally shared by the British newspaper Daily Mail.

“Being transgender is not an illness or something to be ashamed of,” the book continues. “If you’re questioning your gender identity—or if you already know for sure that you’re trans or nonbinary—talk with an adult you trust, like a parent or school counselor.”

The page goes on: “If you haven’t gone through puberty yet, the doctor might offer medicine to delay your body’s changes, giving you more time to think about your gender identity.”

“If you don’t have an adult you trust, there are organizations across the country that can help you,” author Mel Hammond writes.

The last paragraph on the page is arguably the most concerning, telling young people that if they are “transgender or nonbinary, loving your body might feel a bit different than it does for a cisgender person.”

Parts of your body might make you feel uncomfortable, and you might want to change the way you look. That’s totally OK! You can appreciate your body for everything it allows you to experience and still want to change certain things about it.

It’s not hard to imagine a 10-year-old reading these words and asking, “If I don’t love my body, if I want to change parts of my body, or I feel unfordable about how I look, am I transgender?”

“In the United States today, the girls and women who fit the beauty standards tend to be … White,” page 69 reads. “It’s no secret that racism shapes who appears in TV, films, and advertisements.”

“Body Image” is not without good advice to young girls, telling them that “real happiness comes from doing good, not looking good,” and encouraging kids to exercise and move their bodies every day.

But there are plenty of good books that encourage girls about who they are without prodding them to question whether they are in fact girls or making them feel like victims or villains because of the color of their skin.

Some of these positive books were published by American Girl years ago.

American Girl was founded in 1986 by entrepreneur Pleasant Rowland, now 81, after a trip to Colonial Williamsburg. Rowland had the idea to create a series of books about American girls growing up throughout U.S. history.

A doll would accompany each book character and historically accurate outfits and accessories would be sold for each doll, “so girls could play out the stories,” Rowland said in a speech marking American Girl’s 25th anniversary.

Her vision became a phenomenal success, with American Girl making over $1 million in sales its first year.

From its inception, American Girl was “a girl company, and anything that was good for girls was ours to give them,” Rowland said during the celebration in 2011.

The company began to stray from its founding vision in 1998, when it was sold to Mattel, the maker of Barbie. At first, the change was subtle, but it didn’t take long for the company to depart from its focus on using dolls to tell stories of American history.

Rowland’s vision of a company that would sell “anything that was good for girls” largely has been lost to an agenda that teaches children they can halt puberty, ditch their girlhood, and even hide “transitioning” from parents.

A box holding my old American Girl dolls is in my parents’ house collecting dust, a shadow of a time when the innocence of children was protected.