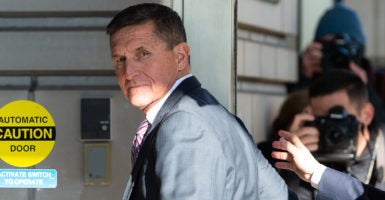 Sullivan’s order, issued Tuesday, solicits “friend of the court” (“amicus curiae” in legal parlance) briefs from third parties on the request by the Justice Department to halt the prosecution of Flynn. It is particularly odd because Sullivan previously resisted all third-party efforts to intervene in the case. The judge did this a total of 24 times, according to Flynn’s lawyer, Sidney Powell.

Moreover, the new order directly conflicts with Sullivan’s Dec. 20, 2017, order, in which he said: “The Federal Rules of Criminal Procedure do not provide for intervention by third parties in criminal cases.”

In a new development Wednesday, Sullivan appointed retired federal judge and former federal prosecutor John Gleeson as a “friend of the court” to present arguments against the Justice Department motion dismissing the charges against Flynn.

The judge also asked Gleeson to address the issue of whether Sullivan should hold Flynn in criminal contempt for lying to the judge, presumably for admitting guilt to a crime Flynn now says he did not commit.

The Tuesday order came one day after a group of former Watergate special prosecutors notified the judge of their intent to seek permission to file an amicus brief.

It is no secret that many former federal prosecutors are unhappy with the government’s motion to dismiss charges against Flynn. Some have called for Attorney General William Barr’s resignation and accused him of wanting to drop the charges only because President Donald Trump has said the retired Army lieutenant general should not be prosecuted.

It is highly irregular for a judge to invite former prosecutors to second-guess how current prosecutors are handling a case. And that’s putting it mildly.

Flynn attorney Powell argues that there “is no place for third parties to meddle in the dispute, and certainly not to usurp the role of the government’s counsel.”

Allowing someone else to “stand in the place of the government would be a violation of the separation of powers” since the authority to enforce the law is given solely to the executive branch, Powell said in her written argument submitted to Sullivan.

As we have noted elsewhere, Powell has also raised serious questions about whether Flynn’s original counsel, who recommended that Flynn plead guilty, had a conflict of interest in the case.

For those confused about what is going on, the reason the Justice Department cannot simply dismiss the case itself is because Flynn has already pleaded guilty.

If Flynn had not entered that plea—and if his trial had not yet commenced—the Justice Department could have just dropped its prosecution without getting judicial approval.

Powell has filed a motion asking that Flynn be allowed to withdraw his guilty plea due to prosecutorial misconduct—a failure by prosecutors to turn over evidence favorable to Flynn.

The Justice Department now says the FBI had no valid legal basis for interviewing Flynn in the first place and any misstatements (or deliberate falsehoods) he may have made during that interview in 2017 were not “material” to a legitimate investigation.

The Justice Department has requested the case be dismissed because the government has no “interest in penalizing a defendant for a crime that it is not satisfied occurred.”

Sullivan, however, has made it crystal clear that he believes there was an adequate factual predicate for the investigation and that Flynn is, in fact, guilty of making a materially false statement to the FBI—the crime with which he was originally charged.

The statement at issue involved communications between Flynn and the Russian ambassador to the U.S. during the time when Trump was president-elect.

In a fiery court session in December 2018, Sullivan told Flynn that the former national security adviser had sold out his country and “undermined” everything the American flag stands for, even suggesting that Flynn could be charged with treason.

So what standard is Sullivan supposed to apply in deciding whether to grant the government’s motion to dismiss the charges against Flynn? Under Federal Rule of Criminal Procedure 48(a), the government may dismiss an indictment, information, or complaint “with leave of the court.”

In Rinaldi v. United States (1977), the Supreme Court reversed a trial judge’s decision to deny a Rule 48(a) motion based on his view that the prosecutor had acted in bad faith. The “salient issue,” the court ruled, is not whether the original charging decision was made in bad faith, but whether the government’s motion to dismiss the case is “similarly tainted with impropriety.”

The high court stressed in the Rinaldi case that the “principal object” of the “leave of court” requirement is to protect defendants against harassment by prosecutors.

The U.S. Circuit Court of Appeals for the District of Columbia, which issues rulings that are binding on Sullivan, has taken an expansive view of the Rinaldi case. In U.S. v. Fokker Services (2016), it held that, while Rule 48(a) appears to give a trial court discretion as to whether to grant the motion, that discretion is limited.

Importantly, the appeals court said the rule is designed to protect defendants against harassment from the government routinely dismissing and then refiling charges. It does not confer on courts “any substantial role” in determining whether charges should be dismissed.

And here’s a crucial point the appeals court made: It explicitly rejected the view that a trial judge should be permitted to deny a dismissal motion based on his or her personal belief that a defendant should stand trial or that any remaining charges would fail to address the gravity of the defendant’s conduct.

But what if Sullivan refuses to allow Flynn to withdraw his guilty plea and proceeds to sentence him? Then Flynn’s only options will be to appeal that decision or seek a pardon from Trump. What the Justice Department and the president might do in that event remains to be seen.