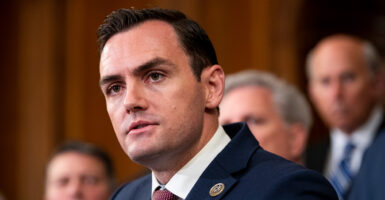 A Republican lawmaker has been tasked with chairing the Select Committee on China in the new Congress.

“The Chinese Communist Party is the greatest geopolitical threat of our lifetime. We need a whole-of-government approach that will build on the efforts of the Republican-led China Task Force and ensure America is prepared to tackle the economic and security challenges posed by the CCP,” Rep. Kevin McCarthy, R-Calif., said in a statement.

“That is why under a Republican majority, I will establish a Select Committee on China,” said McCarthy, who secured the party’s nomination for the House speakership position last month.

To effectively lead this effort, we need someone at the helm who understands the complexities of this generational challenge.

As a Member who served in uniform as a Marine Counterintelligence officer and has dedicated his time in Congress to understanding, educating, and defending America from the threat the CCP poses, Mike Gallagher is exceptionally qualified and is the right person to lead and advance this important agenda at this vital moment.

Rep. Mike Gallagher, R-Wis., serves on the House Armed Services Committee, the House Committee on Transportation and Infrastructure, and the Permanent Select Committee on Intelligence, according to his website. He is also a member of the China Task Force.

Gallagher, who has represented Wisconsin’s 8th Congressional District since 2017 and was re-elected in November, thanked McCarthy in a statement Thursday.

“I’d like to thank Speaker-elect McCarthy for appointing me Chairman of the Select Committee on China and for his leadership on this issue. The greatest threat to the United States is the Chinese Communist Party,” Gallagher said in a statement.

The CCP continues to commit genocide, obscure the origins of the coronavirus pandemic, steal hundreds of billions of dollars worth of American intellectual property, and threaten Taiwan.

The Select Committee on China will push back in bipartisan fashion before it’s too late. Even in divided government, we have an opportunity to build a united front against CCP aggression.

“This bill would force non-profits, university endowments, public pension plans, and any other tax-exempt entity to divest from Chinese companies or lose their tax-exempt status,” a press release said.

Gallagher also recently sounded the alarm over TikTok, called for it to be banned, and labeled it a “digital fentanyl.”

“TikTok should be banned. Sen. Marco Rubio and I have legislation that does exactly that. TikTok is digital fentanyl addicting our kids, and just like actual fentanyl, it ultimately goes back to the Chinese Communist Party. TikTok is owned by ByteDance. ByteDance is controlled by the CCP,” Gallagher said on Fox News last month.

“That means the CCP can track your location, it can track your keystrokes, it can censor your news. Why would we give our foremost adversary that amount of power?” Gallagher asked.

Gallagher, along with other Republican lawmakers, expressed his support for the protesters in China.

“As the Chinese Communist Party continues its totalitarian quest to control all aspects of life in China and beyond, anti-regime protestors are showing the world the true meaning of courage,” Gallagher said in a written statement.

“It is our turn to show courage now, not just through words but through meaningful action,” he added.

Rep. Nicole Malliotakis, R-N.Y., called for both verbal and moral support for those protesting the regime of Chinese President Xi Jinping.

In previous remarks to The Daily Signal, Malliotakis called for the U.S. to show “verbal support, moral support, just speaking out and encouraging the protesters to continue, and to condemn the Xi regime for what they’ve been doing to the Uyghurs, to these protesters.”

Rep. Mike Waltz, R-Fla., an outspoken critic of China and member of the China Task Force, also weighed in on the protests.

“It’s incredible these images are getting past China’s great firewall. These protests are much broader and widespread and I believe there is much more behind this than just COVID lockdown policies,” Waltz previously told The Daily Signal in a statement.