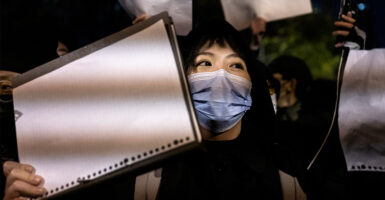 “We have the ability to give the people of China a voice and broadcast their message around the world,” Rep. Mark Green, R-Tenn., says. Pictured: Protesters in Beijing hold up white pieces of paper to oppose censorship as they demonstrate Sunday against China's strict "zero-COVID" measures. (Photo: Kevin Frayer/Getty Images)

“The Chinese Communist Party’s ‘zero-COVID’ policy is not about stopping the spread of COVID-19—it’s another excuse to expand their authority over every aspect of their people’s lives,” Rep. Mark Green, R-Tenn., told The Daily Signal in a written statement.

“We have the ability to give the people of China a voice and broadcast their message around the world,” said Green, a member of the House’s Taiwan Caucus.

“Attempts by the CCP to censor coverage of the protests is to be expected, but censorship by American companies is not only wrong, it’s bowing to a regime with no regard for human life,” he said.

The apartment fire last Thursday, which killed at least 10 and hurt at least nine others, has been blamed on the communist regime’s lockdowns and other harsh “zero-COVID” policies. The fire occurred in Urumqi, in China’s Xinjiang region—infamous for the detention of Uyghur Muslims.

“It’s incredible these images are getting past China’s great firewall. These protests are much broader and widespread and I believe there is much more behind this than just COVID lockdown policies,” Rep. Mike Waltz, R-Fla., an outspoken critic of China and member of the China Task Force, told The Daily Signal in a written statement.

Waltz, a retired Army Green Beret who will begin his third term next month, also proposed actions the U.S. should take regarding the protests in China.

“First, the U.S. should make it clear we stand with those protesting against communist oppression,” Waltz said.

Additionally, we should be sanctioning [and] restricting capital to the CCP surveillance companies, helping protesters penetrate CCP firewalls, instruct Apple to turn AirDrop back on, and send a clear warning that there will be consequences should these crackdowns become more violent.

Waltz previously labeled the communist nation as America’s “toughest adversary … because it’s the first one with an economy as big or bigger than ours.”

Rep. Nicole Malliotakis, R-N.Y., called for both verbal and moral support for those protesting the regime of Chinese President Xi Jinping.

“I mean, look, just showing verbal support, moral support, just speaking out and encouraging the protesters to continue, and to condemn the Xi regime for what they’ve been doing to the Uyghurs, to these protesters,” Malliotakis told The Daily Signal in a phone interview.

We should be rallying freedom-loving, democracy-loving nations around the world to join us in speaking out against China.

We should be speaking out against what Apple is doing in … limiting [protesters’] ability, their communications, via AirDrop, which is one way the protesters communicate and coordinate.

AirDrop is a feature on iPhones that enables users to share content between and among devices. Apple restricted the feature in the communist country earlier this month, Quartz reported.

“As the Chinese Communist Party continues its totalitarian quest to control all aspects of life in China and beyond, anti-regime protestors are showing the world the true meaning of courage,” Gallagher said in a written statement.

“It is our turn to show courage now, not just through words but through meaningful action,” he said.

Sen. Marsha Blackburn, R-Tenn., called the Chinese Communist Party an “evil regime” in a tweet over the weekend.

“The ongoing protests in Communist China show that the Chinese people are pleading for change,” Blackburn, a member of the Senate Armed Services Committee, said.

The Tennessee Republican also expressed hope for what the protests might result in.

“Xi Jinping and his authoritarian regime will not get away with their crimes against humanity,” Blackburn tweeted. “It is my hope that these protests in China shed light on this abusive regime.”

The Biden administration issued a statement on the protests earlier this week that Sen. Ted Cruz, R-Texas, labeled as “pitiful” in a tweet on Monday.

“Pitiful. At a potentially historic inflection point, Dems shill for the CCP,” Cruz tweeted. “Pure weakness from the Biden administration.”

“It’s almost as if [President Joe] Biden wishes he was driving a tank in Tiananmen Square … ,” the Texas Republican said.

In his statement to The Daily Signal, Waltz also criticized what he called the Biden administration’s lackluster efforts to support the protesters in China.

“The Biden administration isn’t doing enough to call out the Chinese Communist Party for their overt atrocities, and this isn’t just about COVID policies,” Waltz said.

“Weakness is provocative, and Biden can do more than simply issue a press statement to call out the repression taking place in many cities and factories across China that supply American corporations,” the Florida Republican said.

Sen. Tom Cotton, R-Ark., called on Biden to voice “American support for these brave Chinese who are in the streets demonstrating against their communist government.”

“Again, this is not just some protest on a college campus in America or European capital, these Chinese are protesting the world’s most powerful, dangerous, techno-totalitarian government,” Cotton said Tuesday during an interview on Fox News Channel.

And just like Ronald Reagan stood with the voices of freedom in the Solidarity movement in Poland or told [Soviet leader] Mikhail Gorbachev to tear down the Berlin Wall, President Biden, in his own voice on camera, should express our support for these brave Chinese who are protesting their communist government.

House Republican Leader Kevin McCarthy, R-Calif., who secured his party’s nomination for the House speakership a little over two weeks ago, criticized not only Biden but what he called the “corporate class.”

“The Chinese Communist Party’s lockdowns have imprisoned people against their will—many have died. As Chinese citizens bravely protest, Joe Biden & the corporate class shrug,” McCarthy said in a tweet Monday.

“Our Select Committee on China will do what Biden refuses—finally reckon with the pariah that is the CCP,” McCarthy pledged.

A few Chinese cities have lessened some COVID-19 restrictions in response to the protests, The Associated Press reported Thursday.

The White House did not respond to The Daily Signal’s request for comment.