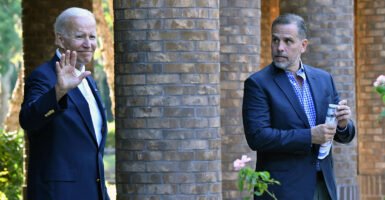 A key House committee will investigate the overseas business dealings of President Joe Biden and his family when Republicans take over Jan. 3, GOP lawmakers announced Thursday.

“The Biden family’s business dealings implicate a wide range of criminality from human trafficking to potential violations of the Constitution,” Rep. James Comer, R-Ky., expected to become the next chairman of the House Oversight and Reform Committee, said at a press conference held the day after Republicans officially gained the 218 seats needed to win the House majority.

In the 118th Congress, this committee will evaluate the status of Joe Biden’s relationship with his family’s foreign partners and whether he is a president who is compromised or swayed by foreign dollars and influence. I want to be clear: This is an investigation of Joe Biden, and that’s where the committee will focus in this next Congress.

Comer said Republicans on the oversight committee “have uncovered evidence of federal crimes committed by—and to the benefit of—members of the president’s family.”

Biden family members under scrutiny include the president’s son, Hunter Biden, and his brother, James Biden, and the Kentucky Republican said possible crimes include:

Comer highlighted two items found on Hunter Biden’s abandoned laptop computer—a map of the U.S. written in Chinese and an email about related D.C. office space that includes the names of the president, first lady Jill Biden, and the president’s brother.

Rep. Jim Jordan, R-Ohio, an outspoken critic of the Biden family’s known business dealings in China, Ukraine, and other countries, has led the charge to investigate the first family, notably Hunter Biden.

During the press conference, Jordan discussed major media outlets’ premature dismissal of the contents of the laptop, which the younger Biden, now 52, left at a Delaware repair shop in April 2019 but never reclaimed.

“What part of Mr. Comer’s presentation was Russian disinformation?” Jordan, who is expected to become chairman of the House Judiciary Committee, asked reporters. “I mean, never forget what happened on Oct. 19, 2020, 15 days before the most important election we have in our country—who’s going to be the next president of the United States.”

Jordan recalled that former CIA Director John Brennan, former National Intelligence Director James Clapper, and 49 other former officials in the U.S. intelligence community signed a letter saying that emails from the laptop cited by the New York Post had “all the classic earmarks of a Russian information operation.”

Jordan referred to the New York Post’s original story about contents of the laptop belonging to the Democrat presidential nominee’s son that, as The Daily Signal has reported, “suggest that Hunter was using his father’s name and office to enrich himself” and “raised serious questions about whether now-President Joe Biden was involved in any way.”

The New York Post’s story was undermined by other major media outlets such as The New York Times; NPR said at the time it didn’t “want to waste our time on stories that are not really stories,” as The Daily Signal reported. Twitter, Facebook, and other social media sites also suppressed sharing of the New York Post’s reporting.

Of the widely publicized letter from Brennan, Clapper, and the other intelligence veterans about Hunter Biden’s laptop, Jordan added:

They further went on to say, ‘We want to emphasize that we do not know if the emails provided to the New York Post are genuine or not, just that our experience makes us deeply suspicious that the Russian government played a significant role in this case.’

And of course, that letter became the pretext for suppressing this story, again, just days before the most important election we have in our country.

Hunter Biden’s laptop has been in the FBI’s possession since December 2019. The president has denied knowledge or involvement in his son’s foreign business deals when he was vice president or after, although evidence to the contrary has emerged since he took office in January 2021.

“We’re committed to getting to the truth, the facts,” Jordan said. “We think that’s what the American people are entitled to.”

The executive summary of the report reads in part:

A review of Hunter Biden’s abandoned laptop, as well as information from whistleblowers, reveals a decade-long pattern of influence peddling, national security risks, and political cover-ups.

Biden family members used their connections with Joe Biden to enrich themselves through the expectation of access to Joe Biden and promises about what a future Biden Administration might do for them.

There are numerous unanswered questions raised by these suspicious activities that warrant further investigation.

The Justice Department has investigated Hunter Biden since 2018 over money laundering allegations as well as potential violations of tax, foreign lobbying, and campaign finance laws.

Before Americans concluded voting Tuesday in midterm elections, a USA TODAY/Suffolk University Poll found that 75% of those surveyed agreed that Republicans would investigate Hunter Biden. Another 17% said they wouldn’t.

More than 50% of respondents agreed that such an investigation into the president’s son “would be warranted.”

The White House did not immediately respond to The Daily Signal’s request for comment for this report.