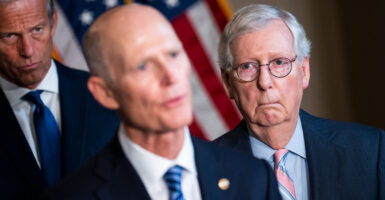 Senate Minority Leader Mitch McConnell, R-Ky., is facing a rebellion in his own conference just days after Republicans underperformed in key races across the country.

A growing number of conservative senators want the GOP leadership elections postponed until after the December runoff in Georgia, where Republican Herschel Walker is facing Democrat Sen. Raphael Warnock after neither won a majority on Election Day.

Republican leaders typically hold internal party elections quickly after Election Day to prevent conservatives from organizing opposition—and Conference Chairman John Barrasso, R-Wyo., affirmed Friday that Senate Republicans would do the same again this year. But with frustration already building before Tuesday’s disappointing results, there’s a desire among some to delay the vote.

“It makes no sense for Senate to have leadership elections before GA runoff,” Sen. Ted Cruz, R-Texas, wrote on Twitter. “We don’t yet know whether we’ll have a majority & Herschel Walker deserves a say in our leadership. Critically, we need to hear a specific plan for the next 2 yrs from any candidate for leadership.”

“The Senate GOP leadership vote next week should be postponed,” Sen. Marco Rubio, R-Fla., said earlier Friday on Twitter. “First we need to make sure that those who want to lead us are genuinely committed to fighting for the priorities & values of the working Americans (of every background) who gave us big wins in states like Florida.”

In addition, Politico reported Friday that three GOP senators are circulating a letter to their colleagues requesting a delay. The effort is being led by Sens. Ron Johnson, R-Wis., Mike Lee, R-Utah, and Rick Scott, R-Fla.

“We are all disappointed that a Red Wave failed to materialize, and there are multiple reasons it did not,” the senators wrote. “We need to have serious discussions within our conference as to why and what we can do to improve our chances in 2024.”

“I’m not sure if any other senator will run or not. Nobody’s indicated they would. But my view is that we need new leadership in that position,” Hawley said Monday.

In July, Schmitt floated two other possible leaders: Sens. Cruz or Lee. “Mitch McConnell hasn’t endorsed me and I don’t endorse him for leadership,” Schmitt said at the time.

Asked this week if he remains opposed to McConnell, Schmitt said, “I said what I said, and I stand by those comments.”

Seeking to quell the uprising, Barrasso assured his colleagues that next week’s Republican conference meeting would afford every senator “a chance to be heard,” according to a letter obtained by Politico.

“After presentations from candidates, and there is every opportunity to address questions from every member, we will complete leadership elections,” Barrasso wrote.

McConnell was first elected Senate minority leader in November 2006 after previously serving as GOP whip. He is the longest-serving Republican leader ever—spanning four presidents and stints in the Senate minority and majority.

Scott, who leads the National Republican Senatorial Committee, was asked Sunday on NBC’s “Meet the Press” about potentially challenging McConnell. At the time and in the days that followed, Scott refused to rule out the idea.

“If this is true, most of our voters will be very disappointed to learn that while they were focused on winning elections, their campaign chairman was plotting an ill-fated career advancement,” Holmes told Politico.

Throughout the campaign, Scott urged Republicans to put forward a positive agenda for America and released his own 12-point plan. McConnell instead preferred to focus on President Joe Biden’s failures.

When asked about Scott’s plan in March, McConnell said: “If we’re fortunate enough to have the majority next year, I’ll be the majority leader. I’ll decide in consultation with my members what to put on the floor.”

“Scott’s agenda was detailed, comprehensive, courageous, and almost unanimously attacked by Senate Republican leaders,” Roberts wrote. “Tellingly, his colleagues did not take issue with this or that specific policy in his agenda. They slammed Scott for offering a plan at all. This is how Washington works today. Leaders hide bills from members; members hide their priorities from their constituents; candidates hide their agendas from voters.”

Roberts said the one key takeaway from Election Day is that “the American people want new leadership in Washington, D.C.”

Editor’s note: Updated to include information about Barrasso’s letter.