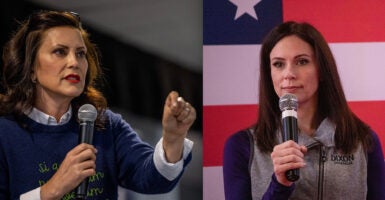 With 68% of the vote counted, Whitmer was leading with 51.7% to 46.6% for Dixon, The Associated Press reported. Fox News, among others, called the race for Whitmer.

Whitmer’s victory over Dixon, whose background is in business and conservative media, is being celebrated by voters such as Matt Pauly and his wife Mindy Morgan, both 51. They voted all-Democrat in the midterm election.

There were “lots of reasons” to support Whitmer, Morgan told The Daily Signal after casting her ballot at East Lansing Hannah Community Center on Tuesday morning.

“No. 1, reproductive freedom,” Morgan said, adding that the governor did “an amazing job early on seeing what was coming down with the Supreme Court [overturning Roe v. Wade], and made sure that [access to abortion] was protected.”

“I also think she did a terrific job navigating COVID,” Morgan said.

Pauly said he knows Whitmer received criticism for her COVID-19 protocols, but added: “We’ve strongly backed her and I think [the protocols are] one of the reasons why we’re emerging” from the pandemic.

Matt Hall is 23 and about to graduate from Michigan State University. Hall said he cast his ballot for Whitmer because he couldn’t support Dixon.

Dixon would “roll back reproductive rights, along with a lot of the voting rights, and other things that we really need,” he said, adding that “we need those things as a baseline just to not get worse.”

But Whitmer supported Michigan’s pro-abortion Proposal 3, which Dixon opposed and voters also rejected Tuesday. Approval of the ballot measure would have added a “right” to abortion to the Michigan Constitution.

“I’m not superexcited about the prospect of progress and change positively with Gretchen Whitmer,” Hall said, “but I did see her at least as like a bulwark that could stop some of the really negative things from happening.”

Whitmer ran for reelection on a platform focused on abortion, economic issues, education, and improving state roads and bridges.

The incumbent Democrat had come under criticism from Dixon and other Republicans for her COVID-19 lockdown measures, which closed restaurants, businesses, and schools to in-person learning. Since schools first closed in March 2020, Whitmer didn’t apply any real pressure for them to reopen to in-person learning for a year, until March 2021.

During a debate with Dixon in October, the governor argued that her COVID-19 policies “have saved thousands of lives.”

But Dixon said in a statement to Bridge Michigan that the governor “destroyed our small business community, stole years of schooling from our kids, and forced hardworking Michiganders to follow her intrusive orders that picked winners and losers.”

“We’re struggling to run our businesses,” Bloomfield told The Daily Signal during a rally for Dixon held Monday at her restaurant, JB’s Whiskey, just 5 miles outside Battle Creek.

Bloomfield, 61, said she faulted Whitmer for challenges she and other business owners face.

“It wasn’t just COVID, it was all the restrictions that have been put on us,” Bloomfield told The Daily Signal. “It’s not getting supplies that you need to operate your business. It’s people not going to work, doing their jobs like they used to, so that you can do yours. It’s just a domino effect.”

From chicken to turkey to individually packaged small cups of cream for coffee, Bloomfield said, costs are high and product is in short supply.

Perry Borden stood waiting for Dixon to take the stage with a flag draped around his shoulders reading, “Tuder [sic] Dixon for Governor.”

Borden, 49, said he works for an energy supplier and that business took a “big hit over the last couple years.”

Admitting that he didn’t immediately back Dixon in the primary, Borden said he decided to support her because “she is pro-business” and has “Trump’s backing.” And, he said, Dixon “is against the policies that hurt our kids, [such as] keeping them out of school.”

Improving education and supporting businesses are two issues on which Dixon campaigned heavily.

“We’re going to bring back those businesses,” Dixon said of businesses shuttered during the COVID-19 lockdowns, “and we’re going to do that with a real economic development plan.”

“The best thing we can do for Michigan businesses is to make it easier to do business in the state of Michigan,” Dixon said to cheers.

The gubernatorial election was an opportunity to “bring back education,” the Republican challenger said. “Go back to the basics of reading, writing, and math, getting the woke stuff out of our schools, [and] focusing on our kids.”

During her final campaign rally Monday night in Lansing, Whitmer told the crowd that the election could be close and maybe even “decided by a few thousand votes.”

The governor’s seat in Michigan has switched between Republicans and Democrats almost a dozen times within the past 100 years. Rick Snyder was the last Republican to hold the office, from 2011 to 2019. Jennifer M. Granholm, a Democrat, preceded Snyder from 2003 to 2011.

In the 2020 presidential race, Joe Biden defeated incumbent Donald Trump in Michigan by about three points.

“We’re all Americans, at the end of the day,” Rabhi said, adding: “We’re all in this together, this great experiment of democracy, and we have to remember that.”