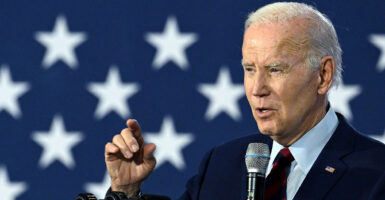 President Joe Biden and his fellow Democrats are campaigning on abortion after the overturning of Roe v. Wade, but in-depth polling suggests the issue won't help them much. Pictured: Biden speaks in Hallandale Beach, Florida, on Tuesday. (Photo: Jim Watson/ AFP/Getty Images)

President Joe Biden and his party fear a defeat at the polls next week amid historic inflation, high gas prices, and rising crime in Democrat-controlled cities. Facing the prospect of a Republican wave election, Democrats have turned their focus to abortion, banking on the overturning of Roe v. Wade to motivate voters.

While polling appears to bolster Democrats’ chances on the issue, a closer look reveals that the Democratic platform does not actually align with what most Americans want from laws on abortion.

A majority of Americans (62%) disapprove of the Supreme Court’s decision to overturn Roe, according to a July poll from the Pew Research Center. A January Marist poll commissioned by the Knights of Columbus found that 55% of Americans identify as “pro-choice.”

“Americans don’t like rights being taken away,” Abby Curran Horrell, the executive director of House Majority PAC, House Democrats’ top outside group, told Politico. Her PAC is running abortion-related ads, even in more rural districts. “We feel very confident in the strategic messaging decisions that we’re making to win races,” she said.

Yet when pollsters ask Americans what specific restrictions they support on abortion, their preferred policies don’t line up with Democrats’ key legislation on the issue, much less the extreme claim that no one should be able to protect an unborn child, even in the final stages of pregnancy.

The same Marist poll that found most Americans identify as “pro-choice” also reported that 71% of Americans support legal limits on abortion. Marist gave Americans six options on abortion, and most of them favored at least some restrictions. Only 17% agreed with the position that “abortion should be available to a woman any time she wants one during her entire pregnancy.” Some supported allowing abortion only during the first six months (12%), only during the first three months (22%), or only in cases of rape, incest, or to save the mother’s life (28%). Others said abortion should only be legal in cases where the mother’s life is threatened (9%), while 12% said it should never be allowed at all.

Even 72% of those who identified themselves as “pro-choice” supported some restrictions on abortion.

Surely, this must be an outlier, right? Wrong. Many other polls confirm that Americans overwhelmingly support some legal limits on abortion.

“Democrats are going all-in on abortion, spending an eye-popping $343 million on abortion-focused TV ads this year, more than any other issue,” Marjorie Dannenfelser, president of Susan B. Anthony Pro-Life America, told The Daily Signal. “It won’t stop them from losing.”

“Their strategy of promising to impose abortion on demand up to the moment of birth, paid for by taxpayers, on Day One of a Democratic majority is a big liability,” Dannenfelser added.

When asked whether there should be any limits on abortion, Biden recently said, “Yes, there should be.” Yet he refused to say which limits he would support, instead pointing to Roe v. Wade.

Yet most Democrats, and Biden himself, have repeatedly advocated for legislation like the Women’s Health Protection Act, a bill that goes further than Roe v. Wade. While Roe allowed abortions up to the point where an infant can survive outside the womb, the Democratic bill states that the right to abortion “shall not be limited or otherwise infringed,” and gives abortion providers the authority to determine whether or not a pregnancy is considered “viable,” essentially abolishing any limit. Forty-six Senate Democrats voted for the bill, and every Democrat in the House except one voted for it.

“A turning point came when pro-life Republicans introduced a common-sense limit on late-term abortions when unborn children feel pain,” Dannenfelser said. “This put them on offense, exposing the contrast between the Democratic position of abortion without any limits, which only 10% of Americans support, and the 72% of Americans who support a 15-week limit at the latest. Pro-life candidates have momentum on their side going into Election Day, and we encourage them to finish strong.”

“The nationwide abortion ban proposal put forth … is the latest, clearest signal of extreme MAGA Republicans’ intent to criminalize women’s health freedom in all 50 states and arrest doctors for providing basic care,” Pelosi said. “Make no mistake: If Republicans get the chance, they will work to pass laws even more draconian than this bill, just like the bans they have enacted in states like Texas, Mississippi, and Oklahoma.”

Yet GOP leaders are encouraging Republicans to highlight Democrats’ position on the issue, calling it extreme.

“Democrats have gone all-in on their support for taxpayer-funded abortion on demand up until birth,” National Republican Congressional Committee spokesman Mike Berg told The Daily Signal. “NRCC is encouraging candidates to highlight Democrats’ extreme position on this issue.”