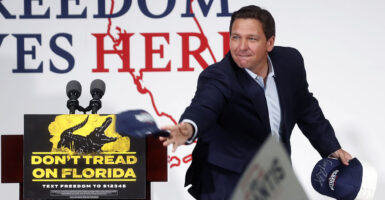 Florida Republican Gov. Ron DeSantis will win reelection, The Associated Press, The New York Times, and Fox News projected. It remains to be seen how large his margin of victory will be but with nearly 80% reporting, DeSantis leads with more than 16 points and more than 1 million votes, 57.96% to Democratic U.S. Rep. Charlie Crist’s 41.39%.

Polling had long suggested that DeSantis would trounce Crist—a former Republican governor—perhaps even by double digits. The RealClearPolitics polling average had him beating Crist by 11.6 points. FiveThirtyEight showed a similar spread. The Cook Political Report rated the race “likely Republican.”

DeSantis famously reopened Florida early during the COVID-19 pandemic, inspiring a slew of attacks from the Left, but welcoming a large influx of Americans coming from other states. Even the Conservative Political Action Conference decamped from Washington, D.C., and headed to the Sunshine State. DeSantis’ state surgeon general, Dr. Joseph Ladapo, did not shy away from bucking the narrative on pandemic restrictions.

DeSantis also signed the “Parental Rights in Education” law infamously branded by opponents as “The Don’t Say Gay Bill.” When Disney attacked the law, he responded by signing a bill revoking Disney World’s special status as an independent special district in what many conservatives saw as a key win against “woke capitalism.”

DeSantis is rumored to be mulling a presidential run in 2024, and his big win might propel him into a strong position for the GOP nomination. While former President Donald Trump endorsed him for reelection, Trump did not campaign with DeSantis, and Trump even branded DeSantis “DeSanctimonious” over the weekend. That suggests that Trump may see DeSantis as a rival. Trump has teased a major announcement—perhaps regarding 2024—for Nov. 15.

In March, DeSantis announced that his wife, Casey, had recovered from breast cancer, becoming “officially cancer-free.” At the first lady’s suggestion, her husband included $100 million in the state’s 2022-2023 budget dedicated to cancer research and care in the Sunshine State.