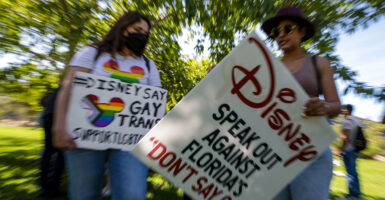 A pair of LGBT employees of The Walt Disney Co. rally against Florida's "Parental Rights in Education" bill on March 22 in Glendale, California, about a week before it was signed into law. (Photo: Irfan Khan/Los Angeles Times/Getty Images) 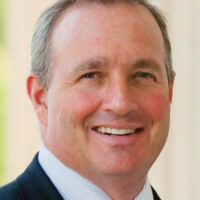 Beginning with the 2021 gubernatorial election in Virginia—in which Democratic candidate Terry McAuliffe for all practical purposes vowed to keep parents out of the classroom, saying, “I don’t think parents should be telling schools what they should teach”—parents began to realize the Democratic Party wanted to leave them behind.

President Joe Biden echoed that sentiment April 27 while speaking to a group of Teachers of the Year, when he told them: “They’re all our children. … They’re not somebody else’s children. They’re like yours when they’re in the classroom.”

Politics aside, the issue at hand is protecting our children from radical ideologies and preserving a parent’s right to be a parent. But the left wants to have a stranglehold on education, to keep parents on the sidelines, and to force them to co-parent with the government, while driving a wedge between parent and child.

When we push back on—and call out—those policies, its true motives are revealed.

To see that displayed firsthand, look no further than Florida, where a former House colleague, Gov. Ron DeSantis, recently signed a bill to reinforce parents’ fundamental rights to make decisions regarding the upbringing of their children because parents should be able to send their first grader to school without worrying he or she will be taught radical sexual orientation and gender identity ideology.

The “Parental Rights in Education” bill, which Democrats and the LGBT lobby falsely dubbed the “Don’t Say Gay” bill simply prohibits classroom instruction on sexual orientation or gender identity in kindergarten through third grade, prohibits classroom instruction that is not age-appropriate for students, and requires school districts to adopt procedures for notifying parents if there is a change in services from the school regarding a child’s mental, emotional, or physical health or well-being.

Florida’s new law exists to ensure parents’ rights and protect young children from being exposed to sexually explicit indoctrination, and contains nothing outside the realm of common sense, but the firestorm from the liberal media, Hollywood, leftists, and woke corporations like Disney (a company that profits from creating content for children) was astonishing.

Just as an aside: Why has Disney shifted from founder Walt Disney’s vision of providing family-friendly entertainment to essentially being the lobbying arm for the left’s LGBT agenda?

My question is: Do the opponents of the law really think children (ages 5 through 9) should receive sexually explicit instruction in school regarding sexual orientation and gender identity ideology and that parents should have no say in what goes on in the classroom?

If the answer is yes, then we really do have reason to be concerned.

Perhaps you remember the chilling lyrics of the San Francisco Gay Men’s Chorus’ “parody” song that made waves last year: “You think that we’ll corrupt your kids if our agenda goes unchecked. Funny, just this once, you’re correct. We’ll convert your children—happens bit by bit, quietly and subtly, and you will barely notice it. … We’re coming for your children. … The gay agenda is here.”

What’s scary is that the “coming for your children” song disguised as parody doesn’t seem as much of an outlier when you consider the left’s vitriolic reaction to the passage of DeSantis’ Parental Rights in Education law; a Disney executive producer’s admission of the company’s “not-at-all-secret gay agenda” released in a leaked video; the Biden administration’s push for mutilating “gender reassignment” surgeries and life-altering puberty blockers for minors; and the doxxing of the Libs of Tik Tok Twitter account created to expose the degeneracy of predators and the horrors of the LGBT agenda by reposting content posted by the radicals themselves.

The truth is, the Biden White House, liberal media, woke corporations, and Democratic elites are playing politics at the expense of children’s lives and well-being. Unfortunately, this is nothing new, as we saw during the COVID-19 pandemic, when Democrats and teachers unions forced young children out of the classroom to protect them from a disease that poses little or no risk for healthy young people and kids.

The number of children who have suffered mentally, physically, emotionally, and developmentally from the onslaught of these ineffective and unscientific COVID-19 policies is heartbreaking. But the left doesn’t seem to care.

From unscientific social isolation measures and unproven mask mandates in schools to exposure to sexually explicit material in the classroom and a pro-abortion agenda, children suffer the most from the woke ideologies of the radical Democratic elites.

We even see this with the Senate confirmation of federal Judge Ketanji Brown Jackson to the Supreme Court. Democrats—and some Republicans—hail her as a hero despite the fact that she has a long history of leniency in sentencing in child pornography cases. That should have raised a red flag on both sides of the aisle, not a speedy confirmation.

Where does it stop for progressives when it comes to promoting their radical ideologies? It doesn’t. Give them an inch, and they will take a mile, all at the expense of those who deserve the most protection.

The reality is this: Conservative policies are pro-child, pro-family, pro-parent, and most importantly, pro-life. Democrats, however, promote policies and ideologies that ultimately impair children in the long run, vilify concerned parents as “domestic terrorists,” and attack the most vulnerable.

Conservatives believe that parents, not the government, should have the primary say in their child’s life and that a child’s rights must be protected first and foremost. For conservatives, when it comes to protecting children, that is the hill to die on.