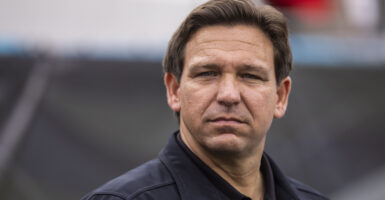 "We applaud the Florida Boards of Medicine and Osteopathic Medicine for protecting children from ghoulish gender experiments that leave kids scarred and infertile," says Heritage Foundation's Roger Severino. Pictured: Florida Gov. Ron DeSantis looks on before the start of a game between the Georgia Bulldogs and the Florida Gators Oct. 29, 2022, in Jacksonville, Florida. (Photo: James Gilbert/Getty Images)

The two boards approved the rule banning such treatments for young people under 18 during a joint meeting on Friday, according to Florida’s Voice.

“The chief point of agreement among all of the experts—and I must emphasize this—is that there is a pressing need for additional, high-quality clinical research,” said Dr. David A. Diamond, chair of the Florida Board of Medicine, who is a radiation oncologist, the publication reported.

Florida Surgeon General Joseph Ladapo had warned that the state “must do more to protect children from politics-based medicine” in a June letter to the board.

“Florida must do more to protect children from politics-based medicine. Otherwise, children and adolescents in our state will continue to face a substantial risk of long-term harm,” Ladapo wrote.

“While some professional organizations, such as the American Academy of Pediatrics (AAP) and the Endocrine Society, recommend these treatments for ‘gender affirming’ care, the scientific evidence supporting these complex medical interventions is extraordinarily weak,” he added.

Roger Severino, vice president of domestic policy at The Heritage Foundation and former director of the Office for Civil Rights at the U.S. Department of Health and Human Services, said Friday that children should “never have their sex treated as a disease that needs ‘curing’ through permanently sterilizing surgeries, hormones, and puberty blockers.” (The Daily Signal is Heritage’s multimedia news organization.)

“We applaud the Florida Boards of Medicine and Osteopathic Medicine for protecting children from ghoulish gender experiments that leave kids scarred and infertile,” Severino said. “They don’t cure depression, but instead make it worse.”

“Florida’s Department of Health carefully studied the scientific literature and its medical boards held hearings,” Richards said. “They rightly concluded that the evidence does not support so-called ‘gender-affirming care’ as the standard of care for these troubled children, despite hysterical attacks from gender ideologues. Every state should follow Florida’s lead.”