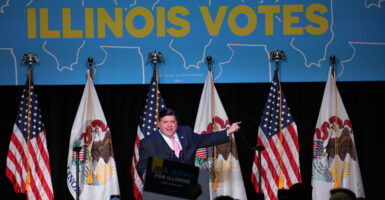 Illinois Gov. J.B. Pritzker participates in a rally to support Illinois Democrats on Sept. 16 in Chicago. Also on the ballot Nov. 8 will be Amendment 1. It’s advertised as a workers’ rights bill, but what it actually does is guarantee that taxpayers will never pay less than they do now. (Photo: Scott Olson/Getty Images)

If Illinois residents think things can’t get any worse economically, just wait. On Nov. 8, they’ll vote on an amendment to the state’s constitution that would guarantee it.

Rising public sector pension costs are already causing property tax increases and forcing cuts in public safety and other vital services. Now along comes Amendment 1. It’s advertised as a workers’ rights bill, but what it actually does is guarantee that taxpayers will never pay less than they do now.

Among other provisions, Amendment 1 specifies that the fundamental right to bargain—which can include everything from pay, benefits, and hours to terms of employment and hiring and firing procedures—can never be diminished, even if the state is in fiscal duress.

The amendment would even enshrine the right to negotiate “economic welfare” rights for public employees at the expense of Illinois taxpayers. The term “economic welfare” is not defined anywhere in the amendment, in state law, or in the National Labor Relations Act, so the term’s interpretation could be far-reaching and include things such as public employees’ housing allowances, as advocated for by the Chicago Teachers Union.

Although no other state has enacted a constitutional amendment like Amendment 1, Illinois has its own experience with a similar constitutional provision that applies exclusively to public employees’ pensions—and the consequences have been severe.

In other words, the pension system that public employees enter on their first day of service must be the same system (or better) when they retire decades later.

That’s a big problem because unfunded pensions are enormous and growing. According to the American Legislative Exchange Council’s latest “Unaccountable and Unaffordable” report on public pension liabilities, Illinois’ pension system is only 21% funded and has $533 billion in unfunded obligations. That works out to $41,700 per Illinois resident, or $167,000 for a family of four—costs that will have to come from higher taxes.

But taxes are already high in Illinois, and pensions are so burdensome that even when flush with cash from federal COVID-19 funds, Illinois contributed only 71% of what it was supposed to toward its pensions in 2021.

Immutable pension costs are crowding out other public services. According to the Illinois Policy Institute, inflation-adjusted pension spending in Illinois increased 584% between 2000 and 2022, employee insurance expanded 107%, K-12 education spending grew 25%, and all other spending fell 20%.

In the 2021 school year, 39% of all education spending in Illinois went toward paying teachers’ pensions. And the share of new spending is even more skewed. Between 2009 and 2014, teachers’ pensions consumed 89% of all new education spending in the state. The average Illinois teacher retires at age 58 and receives a pension of $82,222 per year—nearly 20% more than the average active Illinois teacher’s salary of $69,300.

And as crime surges nationwide, especially in places like Chicago, public sector pensions are part of the problem. High pension costs have forced localities to cut police and firefighters.

Amendment 1 would extend the permanency of Illinois’ irreconcilable pension liabilities to the entirety of public sector compensation—and beyond.

Public sector unions could negotiate with the politicians who depend on their endorsements and campaign contributions to provide things like 10% annual wage increases; six weeks of paid vacation; six months of paid family and medical leave; generous housing and transportation allowances; and stipulations that make it even harder to get rid of derelict or destructive public employees.

And any attempts by future lawmakers to pare back excessive costs and harmful practices would run afoul of the law because Amendment 1 guarantees that the law can only go in one direction—the one that public sector unions favor.

The consequence for Illinois residents will be ever-expanding taxes, reduced public safety, inferior schools, and even more residents and businesses fleeing the state.

The Illinois Policy Institute estimated that the average Illinois family’s property taxes will rise by $2,100 over the next four years. That estimate assumes the status quo, but if Amendment 1 passes and public employees’ unions could negotiate higher pay and benefits, as well as virtually limitless provisions under “economic welfare,” those costs will continue to rise and even fewer people will be left to pay them.

Amendment 1 is the opposite of what Illinois residents and businesses need.

Instead of expanding a law that’s already bankrupting the state, Illinois should instead give its voters an opportunity to amend the state constitution’s pension clause so that lawmakers can enact commonsense reforms to protect workers’ pensions and prevent them from bankrupting the state and local governments.

Amendment 1 is also the opposite of what federal taxpayers need. They’re already having to bail out private sector unions’ broken pension promises. The cost of a public sector pension bailout would be many times higher, and Amendment 1 will push Illinois closer to the brink of seeking a federal bailout.