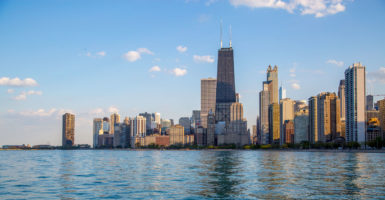 Imagine if Congress wanted to issue $4 trillion in new debt in hopes of leveraging it to help pay down its existing $16 trillion in public debt.

Chicago has $36 billion in total unfunded pension obligations across its four pension funds, but has only enough assets on hand to pay 21 cents out of every dollar in promised pensions benefits.

That’s bad news for Chicagoans, who already experienced a $1.1 billion property tax hike, a 29.5 percent tax on water and sewage bills, and a 100 percent telephone-tax increase, among others, to pay for the city’s generous pension promises.

But granting $10 billion worth of speculative taxpayer-backed debt would be even worse.

In theory, the plan would go like this: The city issues $10 billion in new debt at an estimated 5.25 percent interest rate and invests that $10 billion in the stock market. If it earns a 7.5 percent return in the market, the city will net $225 million per year and could potentially reduce its pension debt by $4 billion at the end of 10 years.

But suppose the city makes some sub-par investments—something not unheard of for Chicago’s pension funds—or the stock market tumbles.

If the city’s $10 billion “investment” were to decline by 10 percent over the first two years and then earn only 4 percent per year, taxpayers would lose $5.6 billion at the end of 10 years.

Investing in the market for the long haul is a sound strategy for personal savings and retirement planning. Risking taxpayers’ money in get-rich-quick schemes is a reckless ploy for making good on previous politicians’ excessive promises.

Take Puerto Rico, for example. The commonwealth issued pension bonds in 2008, hoping that despite the island’s poor debt ratings, it could achieve higher returns than the roughly 6 percent interest rate it had to pay on the bonds. Then the stock market declined about 50 percent over the next year, leaving the pension fund even worse off than it had been.

This should be a warning sign for the federal government as well.

While it isn’t considering issuing new debt in hopes of paying off its existing debt, some lawmakers want to force federal taxpayers to provide tens or even hundreds of billions of dollars in subsidized loans to insolvent pension plans so that they can have a go at the same last-ditch speculative investment attempt that Chicago seeks.

Governments should not be in the business of investing taxpayers’ money, but even so, Chicago is in one of the worst positions to do so.

With its borderline junk-rated borrowing status, the city has to pay a premium on any debt it issues. The city’s proposal suggests a 5.25 percent rate for the bonds, but the actual rate could be higher.

If Chicago had to pay more than 5 percent or 6 percent interest on its pension obligation bonds, it would be extremely difficult to out-earn its own interest costs. The city would have to invest in risky assets to increase its chances of paying down pension debts, but that could cause pension debt to snowball even further out of control.

Even if the plan pays off with outsized investment returns, Chicago’s chief financial officer, Carole Brown, noted that the city would still have to find additional new revenue.

Even with those higher payments, pension debts will continue to rise because, as the city’s actuarial report notes, even the required contributions fall “far short of covering the future benefits that were accrued.”

Chicago tried to remedy its pension gap with minor adjustments to pensions, but the city’s employee unions successfully fought that battle in court, relying on the state’s constitutional prohibition against any pension impairment.

Based on the court’s extremely strict interpretation of the pension provision, no city or state government can ever require an employee to contribute a penny more or receive a penny less than the pension system prescribed on the day they were hired.

Without the ability to alter pensions, Chicagoans—and all Illinoisans—face a major bind, even a potential bankruptcy situation.

The only options left are even more and even larger tax increases; this latest taxpayer-backed, speculative investment scheme; or a constitutional amendment changing or repealing the no pension impairment clause.

Hopefully, the financial burden and risk of those first two options will cause residents in Chicago and Illinois to opt for the latter.