State, Local Governments Have Funded Only 35 Cents of Every Dollar Committed to Pensions 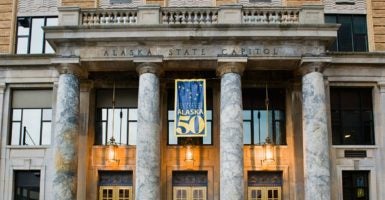 Alaska tops the list in unfunded liability per capita for pensions at $42,950. (Photo: Chris Miller/Newscom)

That’s how much a recent report from the American Legislative Exchange Council, or ALEC, estimates state and local governments across the U.S. have promised to their employees, but can’t afford to pay.

Normally, if an employer promises its workers more than it can pay, its workers lose out, but that’s unlikely to be the case here.

Since most state and local pension promises represent legal obligations, it will be state and local taxpayers who bear the burden of their governments’ unfunded promises.

According to the report, state and local governments as a whole have set aside only 35 cents for every dollar of pension promises. Their $5.6 trillion of unfunded pension liabilities works out to $17,427 for every man, woman, and child in America (or about $70,000 for a family of four).

Since 2009, 89 cents of every new dollar for education in Illinois has gone to teachers’ retirement costs, leaving only 11 cents for actual education.

Alaska tops the list in unfunded liability per capita with $42,950 while Tennessee has the lowest at $7,246. Overall, only five states have per capita unfunded liabilities under $10,000 while 15 states exceed $20,000 per capita. That’s a high price to pay for state and local government’s failure to properly administer their employees’ pension funds.

When the pension bills come due depends on the status of the particular plan.  Some plans, such as the city of Chicago’s teachers’ pension, are already taking a toll on taxpayers and citizens. Since 2009, 89 cents of every new dollar for education has gone to teachers’ retirement costs, leaving only 11 cents for actual education. And nearly 90 percent of Illinois’ recent $32 billion tax hike went toward public employee pensions.

That should be a warning to other cities and states that fail to address their growing unfunded pension liabilities.

How did state and local governments accumulate such massive unfunded pension liabilities? It was pretty easy, actually. They employed what the ALEC report’s authors called “Enron-style” accounting to downplay their necessary contributions and then often failed to make those contributions.

Despite the fact that pensions are part of employees’ compensation, and legal obligations, many state and local governments have effectively treated them as slush funds, available for tapping whenever other spending takes political precedence. Shorting pension contributions is no different than issuing new debt, except that it’s less apparent and doesn’t violate many states’ constitutional balanced budget requirements.

The nature of defined benefit pensions in the hands of politicians will never change—there will always be pressure to short-change pensions and pass the buck to future taxpayers.

State and local governments need to transition out of pensions and into defined benefit retirement contributions. This would put cash, instead of unfunded promises, in workers’ accounts, and would shield taxpayers from bearing the burden of public employees’ unfunded retirement costs while also trying to save for their own retirement.

In the meantime, state and local governments need some self-imposed restraint to prevent them from continuing to short-change pensions. Since public pensions represent riskless guarantees, states should use riskless rates of return to establish their required contributions. Moreover, states should make required contributions mandatory, instead treating them as discretionary.