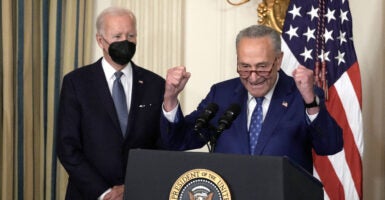 Senate Majority Leader Chuck Schumer, D-N.Y., exults at the signing ceremony for the misnamed Inflation Reduction Act with President Joe Biden at the White House on Aug. 16. The law is Exhibit A for ill-advised, counterproductive government micromanagement of the economy. (Photo: Drew Angerer/ Getty Images)

It’s almost certainly true that the company president didn’t set the price of the last product you bought at Walmart, Costco, or Amazon.

If the head of a major multinational retailer did set the day-to-day prices of tens of thousands of items across hundreds of different markets, he wouldn’t have time to do much else.

Such micromanagement would be a terrible idea for a large retailer because the company president would inevitably set many of the prices too low.

By the time he could know that some items were overselling, those items might have sold out. Or he might set prices too high, causing inventory to swell and forcing the company to slash prices more than it otherwise would.

Either way, the company could lose billions of dollars and go bankrupt if top management failed to delegate such decision-making to pricing managers or other employees who are close enough to the ground to allow them to make informed decisions about the appropriate prices in a particular store or for a particular product.

Governments are even less well-qualified than company executives to set prices or micromanage the economy.

In true socialist economies, where the government is responsible for price-setting, shortages and bread lines are commonplace for exactly that reason.

Venezuela was once the richest country in Latin America. Then it nationalized industry after industry, putting the government in control of the means of production. Government technocrats now have the power to dictate prices across much of the economy.

Today, more than 76% of Venezuelans live in extreme poverty, despite the country’s rich oil reserves.

The mismanagement of centrally planned economies around the world and across history have led to similar economic pain for people from Soviet Russia and East Germany to Maoist China and North Korea.

Never trust government micromanagers to run an economy. From their lofty perches, they will run the economy right into the ground.

But the problem of central planning is not just a problem for openly socialist countries. Central planning takes a softer form here at home than it does in Venezuela, but U.S. lawmakers increasingly try to control prices and investment decisions in the private sector.

In the span of less than a month this summer, Congress and the president committed to well over $1 trillion of targeted subsidies, taxes, and regulatory changes meant to influence prices and private investments in energy, higher education, health care, and technology.

On Aug. 16, President Joe Biden signed the so-called Inflation Reduction Act into law. The new law imposes a tax on the methane emissions of certain petroleum and natural gas producers, which will start at $900 per metric ton in 2024 and increase to $1,500 by 2026. The intent of such fees and taxes is to raise the price of conventional fuels and to reduce their usage.

The same legislation lavished $369 billion of tax credits and other handouts for the purchase or production of certain forms of green energy, such as electric vehicles and charging stations, and solar panel and wind turbine components. Those subsidies are intended to lower prices of preferred items and subsidize whole supply chains for government-favored “green” cars, building materials, and energy technologies.

Unfortunately, we’ve seen “green” policies like these before, and they don’t work as well as intended, at least not for consumers.

California subsidizes green energy, and heavily taxes and regulates oil and gas. As a result, the average Californian pays $6.42 for a gallon of gas, more than double that of some other parts of the country. Electricity prices in California are also almost double the national average.

The misnamed Inflation Reduction Act will also give the health and human services secretary the power to effectively set the price of 20 drugs sold to Medicare beneficiaries. This will reduce future investment in lifesaving drugs and lead to higher prices of unregulated drugs.

On Aug. 24, President Joe Biden announced his administration would transfer up to $20,000 of student loan debts per borrower onto American taxpayers at a cost of between about $500 billion and $1 trillion. Unless overturned by the courts, that will retroactively reduce the price of college, law school, and medical school for millions of students fortunate enough to have their debts canceled.

However, by establishing the precedent that student loan debt might be canceled, the administration’s actions will encourage future students to take on more debt and will make it easier for colleges to raise tuition in the future. After all, the students that attend affordable colleges will benefit less from such debt transfers.

On Aug. 9, Biden signed the Creating Helpful Incentives to Produce Semiconductors for America (CHIPS) Act, which included $280 billion for tax credits to semiconductor manufacturers, corporate handouts to technology companies, and other new funding for federal agencies.

But while businesses in government-favored industries will get sweetheart deals to encourage them to invest, the companies that aren’t fortunate enough to qualify for those corporate handouts will face a less investment-friendly tax code in 2022 and beyond.

Businesses will lose the ability to deduct research and development and capital expenses in the year they bear those costs. Businesses are losing expensing for research and development in 2022, and they are set to gradually lose capital expensing between 2023 and 2027. That adds insult to injury for businesses that aren’t in favored industries, as the cost of investing is already skyrocketing amid soaring interest rates.

The federal government took a socialist turn in the summer of 2022. Federal lawmakers chose a handful of industries that they deemed worthy of investment (and some that they deemed unworthy), and they used the tax code and other policies to effectively change the prices of those investments.

In a free economy, many thousands of interactions between ordinary buyers and sellers of goods and services determine prices. Prices reflect the reality of production costs and trade-offs, and they reflect the accumulated knowledge and preferences of everyone in the market.

There’s wisdom in the decisions of millions of ordinary men and women. But Congress and the president have overruled that wisdom.