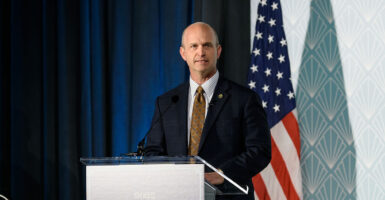 The conservative movement at its best focuses on the lives of real Americans, Heritage Foundation President Kevin Roberts said at the recent American Economic Forum in Washington.

“We have to get out of the habit of spending so much and expecting modern monetary theory and/or inflation to pay down debt,” Roberts said, adding that the national debt is an albatross around the neck of the typical American family.

The two men discussed, among other things, Congress’ recently passed $280 billion CHIPS and Science Act, family policy, and the trajectory of American conservatism.

Throughout the discussion, Roberts stressed the practical importance of policy questions. Those aren’t mere political games, he said. When those on the left or right are too focused on winning a debate, they lose sight of the broader goal of public policy: namely, improving the lives of real Americans.

Roberts said that good intentions alone do not ensure good policy outcomes. Policymakers must keep in mind the Americans affected by their policies, as well as what’s politically possible, he explained.

He pointed to the CHIPS and Science Act as an example of a seemingly well-intended policy that will produce bad outcomes. (CHIPS is an acronym for Creating Helpful Incentives to Produce Semiconductors.)

The bill passed the Senate by a vote of 64-33 on July 27; the House passed it the next day, 243-187. The legislation was set to be signed into law Tuesday by President Joe Biden.

The measure aims to boost American semiconductor chip manufacturers and combat the threat China poses to America’s national security. Roberts said he views the Chinese Communist Party as a greater threat than the former Soviet Union was.

But the CHIPS and Science Act, Heritage’s president argued, simply would line the pockets of corporations that are its beneficiaries.

As Roberts noted in a July 22 statement:

The answer to the [Chinese Communist Party’s] malevolent ambitions is not spending billions of dollars to help Fortune 500 companies, with no guarantee those dollars won’t end up supporting these companies’ business operations in China.

Additionally, the act’s [$280] billion price tag will contribute to record inflation and increase the already historic cost of living for working and middle-class Americans.

At the forum, Roberts suggested a pilot initiative as an alternative to the CHIPS and Science Act.

In such a model, he said, legislators could find three of the poorest areas of the country that could support chip factories. It would involve a public-private partnership in which federal money would be sent with a clear and specific purpose to those localities.

Roberts cited other ways the federal government oversteps its bounds. In response to a question from Burtka—“What causes inflation?”—Roberts responded pointedly: government.

That’s perhaps an oversimplification, he added, but there’s still truth in that answer.  Roberts contended that the current and prior presidential administrations are both partly to blame.

“I’m a conservative well before I’m a Republican,” he said.

Roberts noted that the national debt skyrocketed during Donald Trump’s time in office, and now during Joe Biden’s.

Government overspending creates inflation, which affects human behavior, he said. “I always like to see policy through the lens of the average American.”

With inflation, for example, Americans face higher prices at the grocery store and at the gas pump.

Policymakers also should cut down on the overgrown safety net that has burgeoned over the past few decades, Roberts said, adding that he “would love to see an overhaul of the safety net system,” because it “undermines human dignity.”

At the very least, America must reform the welfare system in its current form, he said.

Later in the discussion, Roberts affirmed a concern that Burtka and some audience members expressed—namely, that big corporations are more concerned with “politicking” than with the public interest.

Generating profit and serving the common good ought to go together, Heritage’s president said.

He expressed hope that Americans eventually will step up and say “no” to businesses that cater to the interests of political and cultural elites.