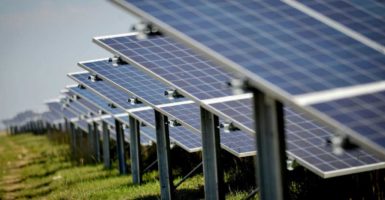 “The ongoing price erosion and the development of the business” has left the company “over-indebted and thus obliged to file for insolvency proceedings,” SolarWorld, which is also the largest U.S. solar panel maker, said in a statement.

The filing comes after SolarWorld was forced to lay off employees earlier this year. The company employs around 3,000 people, including 800 in Hillsboro, Oregon, and was one of the few German-based solar companies to survive a recent market downturn.

Not everyone in the solar industry agrees increased tariffs would be a good thing. The U.S. company Sunnova sent a letter to the U.S. trade commission arguing the “imposition of tariffs on solar cells and panels will significantly harm the U.S. economy by destroying jobs.”

The Obama administration imposed tariffs up to 35 percent on solar panel products imported from certain Chinese manufacturers. The 2014 tariff doesn’t seem to have drastically changed the overall industry’s economics.

The solar industry’s biggest problem is likely the very mechanism that led to its rise: lucrative subsidies.

European subsidies, mostly in Germany, led to a massive expansion of the companies’ green energy industry, but eventually subsidies became their undoing as cheaper solar panels from China began to win out.

Cuts to subsidies in Europe only made things worse for the solar industry, further ensuring cheap Chinese panels would win out. A similar story played out in the U.S. where lucrative federal and state subsidies spurred green energy.

SolarWorld has gotten a whopping $115 million in federal and state grants and tax subsidies since 2012, according to the Union-backed group Good Jobs First. And that’s on top of the nearly $91 million in federal loan guarantees the company got during that time.

SolarWorld lost 80 percent of its stock value after it announced bankruptcy filings Wednesday.