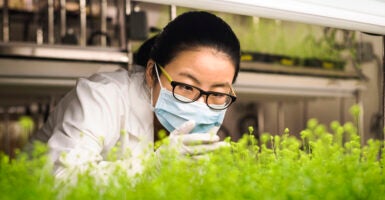 When President Donald Trump signed the Tax Cuts and Jobs Act into law three days before Christmas in 2017, he implemented one of the most comprehensive tax reform packages of recent years.

The new law included significant tax rate reductions, simplifications, and other reforms in the individual tax code. In 2019, Heritage Foundation analysts scored the Tax Cuts and Jobs Act on a state-by-state and district-by-district basis; we found that that the law would save the typical American household more than $26,000 in take-home pay and save a family of four $44,697.

The law led to an increase in business investment that outpaced projections by government scorekeepers, helping boost gains for workers. Two years after the tax cuts took effect, the average production and nonsupervisory worker was receiving $1,406 more in annual earnings than he would have if rates of wage growth had continued to decline at the previous pace.

Under current policy, companies may “expense” the costs of research and development, meaning that they may deduct these costs fully from their taxable income in the year the costs were incurred. This deduction for “qualified research expenses” has been available since the 1950s under Section 174 of the tax code.

However, beginning next year, companies will be required under law to amortize these costs over five years. Sadly, this change in tax treatment will increase the cost of investment, consequently discouraging R & D and ultimately reducing economic growth.

As the chart illustrates, revenue would drop by  $128 billion over 10 years if we allowed full expensing of research and development expenses. The Tax Foundation also scored this proposal in 2019.

Congress should work to prevent harmful tax hikes on businesses and individuals, including those resulting from the provisions on expensing for research and development set to be implemented next year.

Although further reforms are warranted to reduce the harms in the tax code, Congress should pair them with reductions in government spending.

As demonstrated by two major reports this year, entitlement programs—particularly Medicare and Social Security—are the two main drivers of the nation’s deficit along with massive runaway spending. Proper reforms to those entitlements are the only meaningful way to address the nation’s skyrocketing debt.

Permitting the full deduction of R & D expenses would be a step in the right direction toward eliminating policies that discourage investment.

Taxes stifle economic growth and job creation, and it is fundamentally important to maintain a healthy economy that allows our businesses to remain competitive in this ever-changing 21st century. Lawmakers would be well advised to make research and development expenses fully deductible.