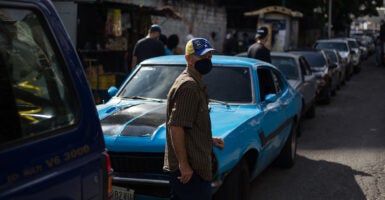 A man waits next to his car in a line to refuel the tank of his vehicle near a gas station in Caracas, Venezuela, Oct. 5, 2020, amid the new coronavirus pandemic. Venezuela launched a plan to distribute gasoline according to the registration numbers of the vehicles, a measure in response to the severe fuel shortage in the country. (Photo: Cristian Hernandez/AFP/Getty Images)

People hate America’s big disparities in wealth. It’s a reason why, among young people, socialism is as popular as capitalism.

The Democratic Socialists of America want a country based on “freedom, equality, and solidarity.” That sure sounds good.

But does socialism bring that?

One reason for socialism’s continued appeal is linguist Noam Chomsky. For generations, his work has taught students that capitalism is “a grotesque catastrophe.”

I assumed the fall of the Soviet Union would put an end to such misinformation. It did—for about a month.

But since then, the lust for socialism has come back strong. Today, Chomsky says that the Soviet Union “was about as remote from socialism as you could imagine.”

When the Soviets made private businesses illegal, says Powell, “that’s about as close as the world ever saw” to pure socialism.

Now that the Soviet Union is gone, MSNBC anchor Ali Velshi says, “there is no true socialist country that exists.”

No? What about Cuba, China, North Korea, Vietnam, and Venezuela?

Velshi didn’t respond when we asked him.

Venezuela was once Latin America’s richest country. Now it’s the poorest. Many in the media claim that its fall has “nothing to do with socialism,” just “poor governance.”

John Oliver says, “Chavez’s programs could have been sustainable if he pursued a sound economic policy.”

“Yeah,” laughs Powell. “Sustainable if he had a sound economic policy called capitalism.”

I push back. “Why does it have to be capitalism?” Why not socialism without bad management?

The media whined about “lack of federal direction,” but no central authority could direct all those individual adjustments in thousands of different places. In fact, federal direction would have prevented it.

“In a socialist economy, you get a one-size-fits-all adjustment,” adds Powell. “You miss out on this learning process where entrepreneurs copy others when they see things successful and stop doing it when it’s not.” By contrast, “In a market economy, everybody’s little adjustments get tested, and we get to see what works.”

In America, Blockbuster Video was a great success. But then Netflix offered something better—no driving to a store, no late fees. Because Blockbuster didn’t immediately adjust, it went bankrupt.

“In a socialist economy, every adjustment needs to be commanded,” says Powell. “Communicate it down and get everybody to do the right thing. That’s impossible.”

That’s why under socialism, shortages are routine. In Venezuela, there’s so little food for sale that Venezuelans have lost weight.

Yet, “journalists” at Vox produced a video titled, “The Collapse of Venezuela, Explained,” without mentioning socialism even once. Vox’s explanation for Venezuela’s fall: “Oil prices plummeted.”

“The oil price is a complete distraction,” says an exasperated Powell. “There’s plenty of countries that depend on oil revenue. When oil prices went down, people there didn’t start losing weight. That just happened in Venezuela.”

Some claim Venezuela’s and Cuba’s people struggle mainly because of America’s economic sanctions and embargo.

“They certainly don’t help the people,” says Powell, “but it’s an afterthought as a reason for their suffering.”

The U.S. only sanctioned a few Venezuelan officials and their operations—not the country as a whole.

In Cuba, Powell points out: “They drive around 1950s U.S. cars … but there’s no U.S. Navy destroyers [to] prevent Kia, Fiat, and whoever else around the world from sending them cars. The reason for their suffering is they have an economic system that can’t deliver.”