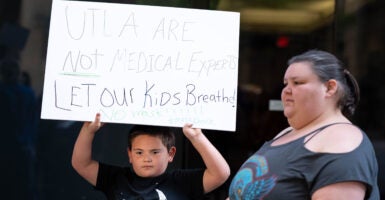 Despite the evidence, back to school means back to masks again for some children this year, and parents and educators still don’t have evidence that mask policies keep students or teachers safe.

Rather, the experience of the past two years has taught us that teacher unions and other education interest groups, not science, are driving school responses to COVID-19.

That means political power is a bigger concern than health and student achievement.

The primary concern for parents, teachers, and policymakers today must be student learning.

Commentators and analysts on both sides of the ideological divide have called prolonged school closures “disastrous,” “catastrophic,” and “severe,” among other epithets.

Research has uncovered significant learning losses among K-12 students over the past two years, with greater academic setbacks for children who were forced to stay out of the classroom for longer periods compared with those who returned earlier to in-person learning.

Some project that the learning losses will be greater for those students who were already falling behind before the pandemic, a forecast that should surprise no one. The learning losses do not point directly to mask mandates, but those requirements are part of a litany of policies that divert attention away from student success.

Still, school officials in Jefferson County, Kentucky, the state’s largest school district, along with educators in Philadelphia are among those continuing mask mandates to start the school year. Other school administrators in Fairfax County, Virginia, and some school districts in California either started the year with a mask mandate or are considering a mandate now.

As of Wednesday, the Centers for Disease Control and Prevention classified more than one-third of counties in the U.S. as areas with high transmission, including some of the largest school districts in the country, such as Miami’s.

The CDC continues to recommend school mask mandates in those counties. Americans have reason to doubt the scientific basis for those decisions, however.

Politics have become inseparable from school health policies. In March, Republicans in Congress released a report confirming what many had long suspected: Teachers unions colluded with the White House and CDC officials to write federal guidance that kept schools closed, despite evidence demonstrating that children were the least affected by the virus.

Agency officials recently pledged to reform the CDC, saying what all Americans have recognized by now: The agency “lost its focus” and had “manifold failures” over the pandemic.

For those reasons, along with a lack of reliable evidence for certain pandemic responses, the CDC has damaged its credibility on school mask mandates. School officials are far less likely today than they were last fall to adopt the agency’s recommendations.

That’s a good thing for parents who will have more latitude to make their own decisions concerning their children’s well-being.

Many school officials are appropriately making decisions on their own. According to Burbio, a data service that aggregates school and community data, only 1.8% of the 500 largest school districts it tracks have such mandates in place. Last fall, nearly three-quarters of those districts required students to wear masks.

School districts across the U.S. are ignoring the CDC’s school masking guidance. Some of that’s due to lower levels of public anxiety about COVID-19. But it also is related to the agency’s failure to establish a sound basis for its recommendations.

But a preprint accepted for publication by The Lancet, a prestigious British medical journal, replicated and extended the Morbidity and Mortality Weekly Report study’s methodology and reached the opposite conclusion.

The Lancet study’s authors looked at schools in the 565 counties included in the Morbidity and Mortality Weekly Report study. They found that, while schools that mandated masks had lower instances of pediatric COVID-19 after three weeks, that difference disappeared after six weeks.

Extending the sample to 1,832 counties, they found no difference in pediatric case rates between schools with mask mandates and those without them.

The Morbidity and Mortality Weekly Report declined to publish the study, although it used the same methods as the study that the journal published last September.

Americans should remember that if school officials do not require masks, educators and students can still choose to wear face coverings. But public officials do not have the research evidence to require everyone to wear masks.

Educators do have enough research, however, to prioritize student success. So far, that’s been one of sad casualties of the pandemic—but one we can still remedy if we put children ahead of politics.