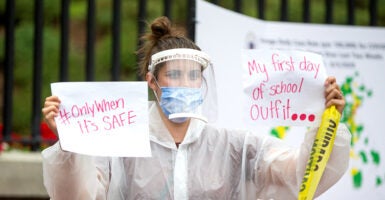 Despite the science showing minimal COVID-19 transmission in schools and billions sent to districts for mitigation, teachers unions still push for closing schools. Pictured: A woman at an American Federation of Teachers protest in Boston in 2020 demanding certain conditions be met for the return to in-person learning. (Photo: Scott Eisen/Getty Images)

Corey A. DeAngelis is national director of research at the American Federation for Children and Adjunct Scholar at the Cato Institute.

Imagine being a second grader in a major city right now. If you entered kindergarten during the 2019-20 school year, COVID-19 first closed your school in March, potentially offering “remote learning.”

As you prepared to enter first grade the following fall, you were one of more than half of students nationwide for whom the school doors were still shut, again having access to remote instruction only.

Incredibly, as you entered second grade, the 2021-22 school year, the district superintendent bows down to the powerful teachers union and shifts back to “virtual learning.”

Another teachers group, National Educators United, is now pushing for a nationwide closure of schools for at least “two weeks.” Yeah, like that worked out so well last time.

In reality, you’ve hardly been in what could pass for “school” since COVID-19 began. Even the days you had access to in-person instruction, learning to read was made harder through masks, your short lunches were spent socially distanced from your friends, and you couldn’t play on the playground equipment during recess.

This scenario has been playing out for millions of children across the country since March 2020. And now, as students return from winter break, school districts across America—including Chicago, Cleveland, Detroit, Milwaukee, and Newark, New Jersey—have regressed to remote learning once more, foreclosing access to in-person instruction for nearly 200,000 students.

These unnecessary closures will have profound negative consequences on children. As Jan Crawford recently said on CBS’ “Face the Nation,” children “will be paying for our generation’s decisions the rest of their lives”—decisions largely being driven by teachers unions.

Chicago—where union leaders effectively just voted to strike—is the third-largest school district in the country, enrolling more than 340,000 students and spending over $27,000 per student, per year. Just 23% of Chicago public school students can read proficiently. Meanwhile, average Chicago private school tuition is only about $11,000 per student each year.

Detroit Public Schools (reading proficiency rate a staggering 6%) have shuttered in-person classes from at least Jan. 3-5 due to “COVID-19 spread placing employees, students, and families at risk along with excessive staff shortages.” The kicker? The district informed families there would be no in-person nor online learning available: “We simply cannot go online districtwide … because all of our students do not have laptops.”

One has to wonder what the district did with the additional $1.3 billion in federal COVID-19 relief funding it received last year—equivalent to $26,400 per student—according to the Mackinac Center.

In Massachusetts, the head of the state affiliate of the American Federation of Teachers is pushing for a return to remote instruction, wrongly arguing that returning to school for in-person learning “will inevitably make the [COVID-19] crisis much worse.”

According to a school tracker maintained by Burbio, as of early December, just 336 schools were closed. That figure now stands at over 3,200.

The Centers for Disease Control and Prevention found all the way back in 2020 that in-person learning was rarely a source of outbreak. More recent findings published in Nature Medicine on school closures in Japan found that closures did not reduce the spread of COVID-19. And a meta-analysis of 90 studies published in the Journal of Global Health found that children and adolescents had a lower chance of catching COVID-19 in schools than they did in the community, demonstrating once again that school closures are not an effective mitigation strategy.

But it’s not just that these closures are counterproductive when it comes to reducing the spread of COVID-19; the damage done to children will not be easily fixed. As some have quipped, “two weeks to slow the spread” has turned into “two years to flatten a generation.”

The academic, social, and emotional costs to young children—to those whose families are beholden to a monopolistic government-run school system—will appear soon, and in shocking fashion in the data. And let’s not forget the older students who have missed numerous proms, homecomings, and sporting events in recent years. Remember how much those meant to you at that age.

The only way out of this mess is to free families from the clutches of the teachers unions. Funding students directly would empower families to access educational alternatives. The good news is that the unions’ political games could further the movement to fund students instead of systems, which already enjoyed significant growth in 2021.

It has been said that Randi Weingarten, the head of the American Federation of Teachers, has provided more fuel to school choice than Milton Friedman. Perhaps, then, a recent New York Times article asking glowingly, “Can This Woman Save American Public Education?” wasn’t that far off.

Her continued push to keep schools closed may be just what widespread school choice needs to become reality—and to rescue a generation from misguided and politicized COVID-19 policies. In this sense, the power-hungry teachers unions might just destroy their own empire.