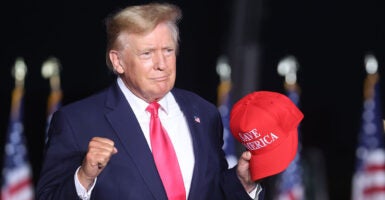 Washington Post columnist Dana Milbank wrote in his new book on the dangers of the GOP that Donald Trump is a “monster the Republicans created over a quarter of a century.” Pictured: former President Donald Trump at an Aug. 5 rally in Waukesha, Wisconsin. (Photo: Scott Olson/Getty Images)

Washington Post columnist Dana Milbank was sounding the alarm in multiple national TV and radio interviews: The rage-filled tone of pro-Trump commentary after the FBI raid on former President Donald Trump’s home at Mar-a-Lago was going to lead to violence, possibly catastrophic violence, like the Oklahoma City bombing of 1995, which killed 168 Americans.

In an hourlong interview on NPR’s “Fresh Air,” Milbank warned there’s too much hot talk about rising authoritarianism. “It doesn’t take a whole lot where we are right now for things to get out of hand. We’ve seen rising violence from right-wing extremists. We really need our leaders—opinion leaders and lawmakers—to step in and calm things down.”

Calm would be good. But you may smirk at this insincere schtick. Because Milbank works for a newspaper whose melodramatic motto for the last five years has implied impending despotism: “Democracy Dies in Darkness.” The hyperbolic title of Milbank’s new book is “The Destructionists: The Twenty-Five-Year Crack-Up of the Republican Party.”

Milbank insists we need to tone down the rhetoric. He should start with his own book title—and the Post motto. But he deeply imbibes from the motto. “Admittedly, I’m partisan,” Milbank writes, “not for Democrats but for democrats … Republicans have become an authoritarian faction fighting democracy.”

The fact that Milbank can get an interview for his dangerous-GOP rant on PBS (“Amanpour & Co.”), an hour on NPR, and a favorable book review on NPR.org by political editor Ron Elving tells you once again that public broadcasting is a taxpayer-funded sandbox for the left.

In these interviews and another with MSNBC, Milbank is pulling out the ancient smear that Republicans and conservative radio hosts caused the Oklahoma City bombing with their anti-government rhetoric. This was a very common smear at the time. Time magazine called them an “unindicted co-conspirator in the blast.”

The late David Broder of The Washington Post huffed then that Rush Limbaugh using the slogan “America Held Hostage” under President Bill Clinton was “dangerous” and could “inflame twisted minds with statements that suggest political opponents are enemies.” Unlike “Democracy Dies in Darkness.”

In a recent column, Milbank is also recirculating the smear that Sarah Palin using rhetoric like “Don’t Retreat, Instead—Reload!” caused the shooting of Rep. Gabby Giffords in 2011. Liberals like Milbank never needed proof that the shooter was a Palin supporter who actually saw the rhetoric, or if the Oklahoma City bomber loved Newt Gingrich. Who needs proof?

Milbank left out smearing Rachel Maddow or Bernie Sanders for the shooting of Rep. Steve Scalise in 2017. The shooter was a big fan of both of them. The Unabomber had Al Gore’s book “Earth in the Balance” in his hideout. But they can’t be “destructionists.” They’re not Republicans.

Liberals apparently can’t be blamed for political toxicity. “Donald Trump didn’t create this noxious environment,” Milbank writes in his book. “He is a monster the Republicans created over a quarter century.”

Milbank is not a serious man for serious times. He’s the columnist as jester. When Dick Cheney accidentally shot a friend in the face in a hunting accident in 2006, Milbank showed up on Keith Olbermann’s show in an orange hunting vest and stocking cap. Olbermann asked if the shooting of his friend would become Cheney’s legacy. Milbank joked, “Well, we’ve got two and a half more years of hunting trips. Let’s not get ahead of ourselves.”

Milbank can mock Gingrich or Limbaugh or Glenn Beck as a noxious presence turning political figures into vicious cartoons and replacing civil discourse with callous humor. But somehow, he can never reflect on whether he resembles that critique.