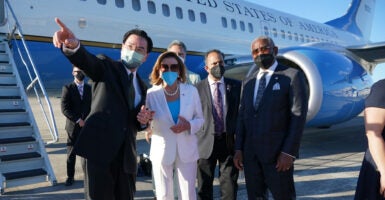 More than ever, it’s in the interest of the United States to pursue a bilateral free trade agreement with Taiwan.

If House Speaker Nancy Pelosi, D-Calif., is genuinely serious about what she said during her historic visit to Taiwan this week, urging the Biden administration to start negotiations on a U.S.-Taiwan free trade agreement would have to be one of her follow-up action items.

Defying the bluster of the Chinese Communist Party and heralding Taiwan’s vibrant democracy, Pelosi became the highest-ranking U.S. official to visit Taiwan since then-House Speaker Newt Gingrich, R-Ga., did so in 1997.

Pelosi underscored that her visit to Taiwan would “focus on reaffirming our support for our partner and on promoting our shared interests, including advancing a free and open Indo-Pacific region.”

In a Washington Post op-ed, Pelosi elaborated on why she decided to visit Taiwan:

We must stand by Taiwan, which is an island of resilience. Taiwan is a leader in governance … .

At the same time, Beijing is squeezing Taiwan economically, pressuring global corporations to cut ties with the island, intimidating countries that cooperate with Taiwan, and clamping down on tourism from the [mainland].

In the face of the Chinese Communist Party’s … accelerating aggression, our congressional delegation’s visit should be seen as an unequivocal statement that America stands with Taiwan, our democratic partner, as it defends itself and its freedom.

Indeed, Taiwan stands for freedom, transparency, accountability, and other democratic characteristics that unambiguously differentiate the island nation from China.

Taiwan’s commitment to cultivating a free economy and a vibrant civil society through independent democratic institutions has clearly made it a notable example for Asia and the rest of the world in terms of how an emerging country can move progressively into new chapters of development.

For example, Taiwan ranked sixth in The Heritage Foundation’s 2022 Index of Economic Freedom. The index assesses the economies of 184 countries based on 12 indicators of economic freedom, from property rights to financial freedom. With its overall score improving over recent years, Taiwan has achieved the status of the economically “free” category. (The Daily Signal is the news outlet of The Heritage Foundation.)

As the 2022 index notes, Taiwan is one of the few countries in the world to have demonstrated a high degree of economic resilience during the past five years, with economic freedom advancing significantly during that period as well.

Also notable is that Taiwan recently ranked as the eighth-most-vibrant democracy in the world, according to the Economist Intelligence Unit’s latest Democracy Index, which is based on five key metrics: electoral process and pluralism, functioning of government, political participation, political culture, and civil liberties.

In 2020, Taiwan, along with Japan and South Korea, moved up a category from “flawed democracies” to “full democracies.”

Taiwan’s economic and political transformations are far more than domestic successes. They have fundamentally altered Taipei’s relationship with Beijing, with Washington, and with the rest of the world. Taiwan has demonstrated to the world that freedom is a stabilizing force, and that free enterprise, free association, and free speech lead to entrepreneurship, prosperity, and security.

According to Washington’s latest Indo-Pacific strategy document, “China’s coercion and aggression spans the globe, but it is most acute in the Indo-Pacific.” To achieve a more free and open region, the document says, the U.S. will build coalitions by deepening treaty alliances and strengthening relationships with leading partners such as Taiwan, New Zealand, and Singapore.

The strategy paper further notes that it is in the interest of America “to ensure an environment in which Taiwan’s future is determined peacefully in accordance with the wishes and best interests of Taiwan’s people.”

To that end, The Heritage Foundation has long called for greater economic interaction and broader dialogue between the U.S. and Taiwan through a bilateral trade and investment pact, which is the logical next step for elevating dynamic economic interaction between the two countries. That policy idea has been enjoying broader bipartisan congressional support as well.

In a December referendum, the Taiwanese people clearly expressed their determination to engage with the international community, showing that Taiwan is willing to accept international standards and tackle difficult trade issues.

Pelosi should take note of that.

Starting the process of a U.S.-Taiwan free trade agreement is one worth investing further in over the next decade as well. Such a practical, more institutionalized economic partnership would reinforce other vital diplomatic links between Taiwan and the United States as true partners in the Indo-Pacific region and beyond.

Now is the time to act on that.