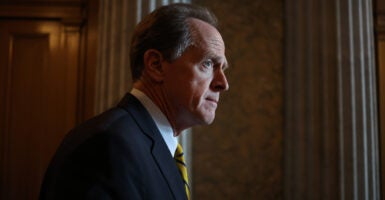 Sen. Pat Toomey, R-Pa., was right last week to stop legislation that would have presumed a host of health conditions are linked to American service members’ exposure to burn pits.

First, Toomey was right because the automatic presumption that many illnesses suffered by veterans are connected to burn pit exposure (ranging from chronic sinusitis to melanoma and any type of reproductive cancer) represents a failure of science. Further, the bill would have allowed the secretary of veterans affairs to expand that list in the future.

As the Government Accountability Office has stated, the “effects from exposing individuals to burn pit emissions were not well understood, and the Department of Defense (DOD) had not fully assessed the health risks associated with the use of burn pits.”

Burn pits are shallow excavations or surface features used for open-air burning, a process used to dispose of waste during America’s recent military campaigns in the Middle East. Although it may seem primitive compared to waste disposal methods used in the United States, this is a relatively common technique in the Middle East and elsewhere.

What’s more, when looking at the vast number of service members who deployed to Iraq and Afghanistan, the percentage who actually were close to burn pits is relatively small.

For those reasons, exposure to a burn pit cannot be considered part of the universal experience of service members who were deployed to the region.

Although veterans who have served our country deserve our thanks and respect, that doesn’t mean that treatment for every illness they suffer following their military service is the responsibility of the federal government. Burn pit exposure is something that needs to be understood and researched, not simply presumed to be the cause of certain illnesses.

Secondly, Toomey was right to stop the bill because, as worded, it would count resources associated with the measure as “mandatory” spending—a technical maneuver that would open the floodgates for even more government spending.

Federal government spending mostly is divided into the categories of mandatory and discretionary spending. Discretionary spending accounts for about one-quarter to one-third of the federal budget and it is what is debated and decided by Congress every single year. Mandatory spending, on the other hand, is not discussed annually and, as a result, has grown uncontrollably.

The legislation would have added yet another program to the mandatory spending pile. Congressional Budget Office estimates put the price tag of this bill at a minimum of $275 billion over a 10-year period—and that’s a price tag that undoubtedly would grow unchecked over time.

This increased government spending would be especially detrimental in the current economic climate of rising inflation and negative growth created by the Biden administration.

Veterans are not a victim class that needs to be appeased by the government’s throwing money at them. This legislation would treat them as victims who have been broken by serving their country and who need to be paid off to go away. (And then one wonders why we have a recruitment crisis on our hands.)

We owe it to our veterans to treat them with respect and honesty. That starts by doing the hard work of actually studying and understanding the effects of exposure to burn pits. And it continues by making decisions that build conditions to help our country prosper and not be buried under a pile of debt.

Toomey did the right, albeit unpopular, thing. For too long, veterans have been treated as a category to be paid off rather than as fellow Americans who contribute to building our country and its future.