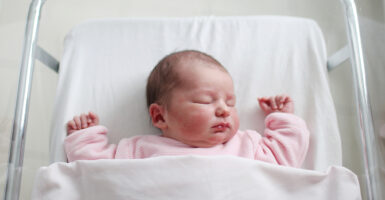 Long before American independence, legislatures were enacting laws to restrict the killing of human beings before birth. In 1973, the U.S. Supreme Court put a stop to those pro-life efforts by manufacturing a constitutional right to abortion in Roe v. Wade and taking away the legislative power to protect life in this way.

But on June 24, the high court acknowledged that its decision in Roe had been “egregiously wrong from the start” and overruled it.

Although that decision eliminated the U.S. Constitution as an obstacle to protecting the unborn, abortion advocates now are changing venues and arguing in state courts that pro-life laws violate state constitutions.

Wyoming and North Dakota are home to two of those legal challenges.

At Issue in Wyoming

In 1977, on the heels of Roe v. Wade, Wyoming enacted a statute prohibiting abortion “after the embryo or fetus has reached viability except when necessary to preserve the woman from an imminent peril that substantially endangers her life or health, according to appropriate medical judgment.”

On March 3, Wyoming Gov. Mark Gordon a Republican, signed into law House Bill 92, which would substitute a ban, with narrow exceptions, on all abortions if the Supreme Court were to overrule Roe.

After reviewing the high court’s June 24 decision in Dobbs v. Jackson Women’s Health Organization, Gordon gave the go-ahead for the new law to go into effect.

Article 1, Section 38 of the state constitution provides that each competent adult “shall have the right to make his or her own health care decisions.”

The same provision, however, allows the Legislature to impose “reasonable and necessary restrictions … to protect the health and general welfare of the people.” The Wyoming Constitution does not define abortion as a type of health care.

On Wednesday, the day Wyoming’s abortion ban was to become effective, Teton County District Judge Melissa Owens issued a temporary restraining order. News reports quoted her expressing concern that pregnant women might suffer “irreparable injury” if they were unable to obtain an abortion to address a problem pregnancy.

The plaintiffs, who include an obstetrician and a nurse, also claim that the law might be interpreted to prevent treatment for ectopic pregnancies or miscarriage.

At Issue in North Dakota

Acknowledging that Roe v. Wade made it unenforceable, the statute also provided that it would become effective if the Supreme Court overruled Roe.

In 2019, North Dakota Gov. Doug Burgum, a Republican, signed into law House Bill 1546, which banned the abortion method known as dilation and evacuation except in a “medical emergency” as defined in the statute.

The new North Dakota law also provided that it would go into effect “on the thirtieth day after the [state] attorney general certifies … [t]he issuance of the judgment in any decision of the United States Supreme Court which … restores to the states authority to prohibit abortion.”

North Dakota Attorney General Drew H. Wrigley, also a Republican, provided that certification in a letter dated June 28, concluding that both laws “shall be given … full effect” 30 days later, which is Friday, July 29.

Article I, Section 1, of the North Dakota Constitution provides that the “inalienable rights … of enjoying life and liberty … [and] pursuing and obtaining safety and happiness …. shall not be infringed.”

The Center for Reproductive Rights sued July 7 on behalf of the Red River Women’s Clinic, the state’s only abortion provider, making both a substantive and a procedural argument.

First, the plaintiffs argued that the abortion bans violate their “right to life, safety, and happiness” under the state constitution.

Second, they argued that Wrigley’s certification was premature because, although the U.S. Supreme Court issued its opinion in Dobbs on June 24, “the Supreme Court has not [yet] issued its judgment in Dobbs.”

That probably seems like a last-ditch, hair-splitting effort to protect abortion access in the state after Dobbs—because that’s exactly what it was.

Under the U.S. Supreme Court’s rules, the court’s clerk enters its judgment on the docket on the day that the court’s opinion explaining that judgment is released. That judgment, however, does not “issue” until “25 days after entry of the judgment,” when the period for petitioning the court to rehear the case has expired.

That date, plaintiffs argued, is no earlier than July 19, and, therefore, the abortion bans could not go into effect until 30 days later.

Romanick agreed with the plaintiffs that the 30-day clock for the abortion bans to become effective starts with “the formal issuance of the Supreme Court’s judgment.” His action gave the abortion clinic 30 more days to continue operation and to complete a planned move to Minnesota, where abortion remains legal.

Cases in Other States

Judges in Wyoming and North Dakota aren’t the first to block state laws prohibiting abortion, and certainly won’t be the last.

Similar litigation also is underway in several other states, and judges have issued orders putting pro-life laws on hold in Louisiana, Utah, Kentucky, Michigan, and West Virginia. This litigation will be more complicated than in the past several decades.

As the cases out of Wyoming and North Dakota demonstrate, the language differs in state constitutions; one affirms a right to make health care decisions, another, a right to “happiness.”

Some state charters have provisions that refer to privacy, others have “equal rights” provisions that prohibit discrimination based on sex. Some state supreme courts have relied on such nebulous language in their state constitutions to find a right to an abortion—much as the U.S. Supreme Court did in Roe—while others have not.

In many states, the judges on supreme courts are elected, and voters may decide that those who might strike down pro-life laws should be replaced. Similarly, voters may become convinced that state constitutions should be changed, either by clarifying that current provisions do not prevent pro-life laws or adding provisions that affirmatively support such laws.

None of these legislative or litigation issues had to be addressed while the Supreme Court held that the U.S. Constitution protected a right to abortion.

Thankfully, that distortion of the Constitution has been remedied. But the long-term goal of protecting the unborn in law really has just begun, and will require dedicated efforts in every state to accomplish it.