March for Life 2020 Theme Is ‘Life Empowers: Pro-Life is Pro-Woman’ 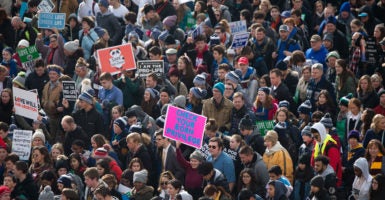 Pro-life activists participate in the March for Life, an annual event to mark the anniversary of the 1973 Supreme Court case Roe v. Wade, which legalized abortion in the U.S., outside the U.S. Supreme Court in Washington, D.C., Jan. 18, 2019. (Photo: Saul Loeb/AFP/Getty Images)

Activists met Tuesday to unveil the 2020 March for Life’s theme in Washington, D.C., at an event where March for Life President Jeanne Mancini told those gathered, “We’ve come a long way from ‘safe, legal, and rare’ to ‘shout your abortion.’”

“We know this message about women and abortion is both deceptive and hurtful,” Mancini said. Her remarks were followed by comments from Gloria Purvis, radio host and chairperson for Black Catholics United for Life; Serrin Foster, president of Feminists for Life; and Victoria Cobb, president of The Family Foundation of Virginia.

The organization will prep for the upcoming march through emphasis on its “Life Empowers: Pro-Life is Pro-Woman” theme, followed by the release of a campaign video for the 2020 March for Life.

The choice to focus on women’s empowerment stemmed mainly from the anniversary of the 19th Amendment this year, Mancini told The Daily Caller News Foundation. Mancini said that “so many people misunderstand what that was about” and that the March for Life will do its best to educate the public on the early feminist movement.

“Sadly, all of the Democratic candidates are wildly out of touch with the mainstream America on these issues,” Mancini told The Daily Caller News Foundation.

President Donald Trump, she added, has been faithful to the promises he has made to the pro-life community and the March for Life “is grateful for the support of the administration on this issue.”

It is not yet decided whether Vice President Mike Pence will speak at the 2020 March for Life, Mancini said, since such presidential appearances are figured out closer to the event for security reasons. She urged attendees to “stay tuned.”