Marching for Life 2016: The Pro-Life Movement’s Many Advances 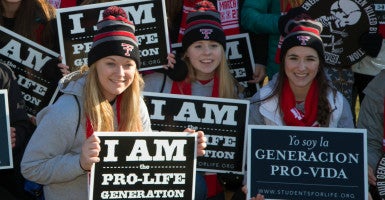 Students from Trinity High School of Dickinson, N.D., were among the thousands of anti-abortion protestors rallying on the National Mall for the "March for Life" in Washington D.C. in 2015. (Photo: Jeff Malet Photography/Newscom)

Despite forecasts of historic snowfalls, large crowds are participating in today’s annual March for Life in Washington, D.C.

Americans from across the country have come to the National Mall on the 43rd anniversary of the Supreme Court’s decisions in Roe v. Wade and Doe v. Bolton, which invented a right to abortion on demand across the country, to join in somber remembrance of the lives lost.

Since that cold January day in 1973, more than 56 million children have lost their lives to legal abortion, and countless women have felt the devastating impacts of abortion on demand.

For more than forty years, the pro-life movement has witnessed to the truth that the Supreme Court denied: that at the moment of conception, a new human being comes into existence who is a person with inestimable value and a right to life.

Today’s March, like so many before it, overwhelmingly features young people—a testament to the truth’s ability to not only change the hearts and minds of an entire generation, but ignite a passion that’s hard to quench.

But the power of the pro-life movement is not merely in the many thousands of marchers who make their now familiar journey to the Supreme Court each year. The movement’s heartbeat and success are in the simple, daily witness of Americans who recognize that every human has the right to life and that abortion victimizes both mother and child.

Every day, thousands of pregnancy centers across the country provide counseling and medical services and empower women facing difficult situations with life-affirming options. Pregnant women and expectant couples are offered vital parenting resources, and birth mothers in tough circumstances are educated on the beautiful choice of adoption and are connected with the many families eager and ready to open their hearts and homes to children.

This cultural shift toward life is reflected in the over 200 pro-life laws enacted by policymakers in the last four years alone. Many include policies ensuring that women are given accurate information before an abortion procedure, abortion facilities are held to reasonable safety standards, and limits are placed on late-term abortions that not only take the lives of children that can live outside the womb, but can also harm women.

The March for Life’s theme for 2016, “Pro-Life and Pro-Woman Go Hand-in-Hand,” takes on particular significance this coming year as the country continues to face the gruesome reality of abortion and debates how to better serve and defend both women and unborn children.

This spring, the Supreme Court will consider one of the most important cases on abortion policy in recent decades. On March 2, the justices will hear oral arguments in Whole Women’s Health v. Cole, a case challenging two Texas provisions that place commonsense health and safety standards on the abortion industry. The law in question, known as H.B. 2, requires in part that abortion facilities meet the same minimum standards for cleanliness and safety as other outpatient surgery facilities and that physicians performing abortions have admitting privileges at nearby hospitals.

This cultural shift towards life is reflected in the over 200 pro-life laws enacted by policymakers in the last four years alone.

Both provisions seek to increase the safety of an industry that often goes about its life-ending work with little oversight. With the memory of late-term abortionist Kermit Gosnell’s “house of horrors” still fresh in many Americans’ minds, the Supreme Court should recognize states’ legitimate interest in advancing commonsense regulations of a lucrative industry that makes much of its money on poor people in dire straits.

The videos released this summer have shown the nation where the logic of abortion on demand inevitably leads: to where tiny livers and lungs are useful for harvesting, but the nameless baby they come from is too small, dependent, disabled, or simply inconvenient to be allowed to continue living. The value of a life within Planned Parenthood’s walls is measured by its utility and convenience—rather than the inherent dignity of every human being.

All women—but especially those facing difficult circumstances—deserve better care for their health and more options than the cold doors of an abortion facility. Taxpayer funding at both the state and federal levels would be put to better use at the thousands of other health centers that provide a wider range of care for women without entanglement with abortion-on-demand.

The pro-life movement will face these debates, as they have numerous others over the past forty years: patiently speaking the truth about the worth and dignity of every mother and child and providing hope, resources, and healing for those caught in a culture that too often devalues life.