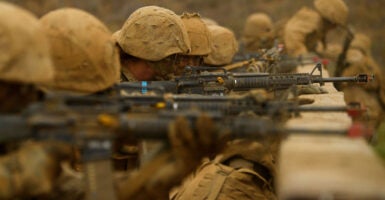 The National Defense Authorization Act authorizes funding levels for defense programs, such as research, procurement, and even pay rates for U.S. troops. Despite growing partisanship and division within the House of Representatives, the legislation received strong support from both sides of the aisle, with 149 House Republicans joining with the Democratic majority in favor of the bill on a 329-101 vote.

The Biden administration had proposed a 2023 defense budget that would reduce the size of our armed forces, retire more ships and planes than it would buy, and ignore the impact of Russia’s war of aggression against Ukraine.

The Biden budget also massively underestimated the effect of inflation. The proposed budget asked for a 4.1% increase, but it was built on the assumption that inflation would only be 2.3%. But with inflation currently running rampant at over 9.1%, the proposed budget would have represented a net decrease.

It also comes at a time when America’s interests are facing challenges across the globe from malign actors, such as Russia, China, Iran, and others.

House Democrats and Republicans alike recognized the current international situation’s Impact on the United States and, in a show of support for a strong national defense, authorized $839 billion for the fiscal year 2023 defense budget.

Most of the resources added by the House are dedicated to retaining those elements of the force that the Biden administration ill-advisedly wanted to end, such as some littoral combat ships and some guided missile cruisers, even though they were still necessary for our defense, as well as to cushioning the effects of inflation on the defense budget.

Passage of the bill came after bipartisan rejection of two amendments offered by the House Progressive Caucus that would have arbitrarily cut resources from the Pentagon without any supporting justification or change of strategy. That was a repeat of a play that the Progressive Caucus has been running for years. Had it passed, it would have sent a message to adversaries and allies alike that there are divisions in Congress’ support for national defense.

Despite the number of improvements the House defense authorization bill made to the president’s budget request, some ill-advised policies still made their way into the final legislation.

One amendment would give the mayor of Washington, D.C., the same authority over the city’s National Guard as governors have within their state. It’s an idea that was resurrected from last year, when it was defeated.

When one considers the myriad federal assets that exist in Washington, including numerous federal law enforcement agencies, on which the mayor does not have information, it would be impossible for the mayor to possess enough situational awareness to effectively control the National Guard in the same way that a governor can.

Another amendment would bar service members from testifying in legal proceedings related to certain domestic deployments, such as riot control. That would rob service members of their basic rights.

Another amendment would change immigration rules for formerly dependent children that are aging out of that status. That’s something that should be addressed on its merits, not included in a bill unrelated to immigration. Immigration should be dealt with separately and comprehensively with a focus on border security.

But on the larger questions of how we are resourcing and preparing our armed forces, the House-passed National Defense Authorization Act is a step in the right direction.

Once the Senate passes its newly released version of the bill, there will be a conference committee that hopefully will craft the best bill possible from what the House and the Senate produce.

For more than 60 years, both the House and the Senate have come together, usually in strong bipartisan fashion, to produce the National Defense Authorization Act. This year, the odds are good that they will add to the streak, but plenty of work remains.