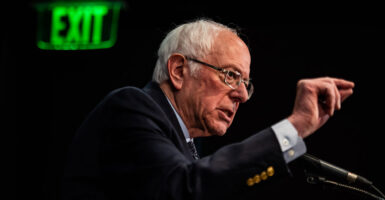 Sen. Bernie Sanders, I-Vt., was a vocal member of a minority in Congress that wanted to cut the U.S. defense budget by 10%. (Photo: Salwan Georges/The Washington Post/Getty Images)

The Congressional Progressive Caucus introduced a measure in both the Senate and the House to cut the U.S. defense budget by 10%.

The proposed amendment to the National Defense Authorization Act was bolstered by a flood of op-eds from think tanks advocating a “more restrained U.S. foreign policy”–shorthand for the U.S. abdicating its current global leadership role.

In the end, in a victory Wednesday for those who care about the security of our nation, Congress soundly rejected both amendments.

The House rejected the amendment 324-93, with 139 Democrats joined by all Republicans to defeat the proposal. The Senate defeated it 77-23, with 23 Democrats joining the majority.

If anyone wants a sense of what this type of reduction would do to the armed forces, check out the first edition of The Heritage Foundation’s Index of U.S. Military Strength, released in 2015.

Heritage’s index details the precipitous declines in readiness that took place as a result of cuts imposed through the Budget Control Act of 2011 and the budget policies of the previous administration.

Seeking to justify draconian cuts, Sen. Bernie Sanders, I-Vt., declared that “the Republican Senate has decided to provide more funding for the Pentagon than the next 11 nations’ military budgets combined.”

This is a canard that relies on simply converting yuan or rubles to dollars with no consideration to how far the money goes in each of the local economies.

When U.S. defense funding is normalized, it is a bit more than that of China and Russia, which do not have the same security obligations as the U.S.

Curiously, the Vermont senator omits any discussion about how the United States could potentially adjust its strategy to accommodate such slashes to the military budget, apart from calling for “ending endless wars.”

Except, there really are no “endless wars” to end.

The U.S. does have around 8,000 troops in Afghanistan, but they are helping that country stand up its own security forces—not fighting a war. That’s a legitimate role for our military to ensure that Afghanistan never again becomes a breeding ground for terrorism once again to spread.

After conflicts, the U.S. often has kept military forces in place to help countries such as the Philippines, Japan, Germany, and Iraq reestablish their security institutions.

Most puzzling is the omission from the discussion of the nature of the threats facing our nation. Nowhere was there discussion of how the U.S. could reasonably expect to handle the challenges posed by China, Russia, Iran, and North Korea with a much-diminished military.

As highlighted by Heritage’s vice president of foreign and defense policies, James Carafano, “the cost of defense should rise or fall in proportion to the security threats facing our nation. And, by that measure, it is abundantly clear that we should be spending more—not less—on our defense.”

A good defense budget needs to begin with the threats facing our nation to build a joint force that is capable of meeting those threats.

Sanders went on to invoke Martin Luther King Jr.’s words: “A nation that continues year after year to spend more money on military defense than on programs of social uplift is approaching spiritual death.”

However, the senator conveniently overlooked the fact that social and economic spending by the federal government amounts to $3 trillion annually.

If my math is correct, $3 trillion is a little more than the $740 billion being allocated for our national defense. It is safe to say that, by that metric, the United States is quite far from “spiritual death.”

Thankfully, the belief that we should cut our defense budget to spend more on social programs, regardless of the external threats to our nation, is confined to the fringe of Congress—for now.

Even the Democratic minority whip, Sen. Dick Durbin of Ilinois, spoke up against these mindless cuts, saying that he disagrees with Sanders’ “basic approach of across-the-board-cuts.”

The chairman of the Senate Armed Services Committee, Sen. Jim Inhofe, R-Okla., defined the debate well by saying that “the proposal by House progressives to cut the defense budget would be tantamount to cutting off our nose to spite our face.”

At least for this coming fiscal year, the “nose cutters” have lost.